First thing is that I have to apologize for going a whole week without writing about last week’s True Blood episode. I only watched it off my DVR yesterday as I’ve been away fighting monsters of my own (3 foot long eels). Blech! You’d think I could handle the nasty little buggers being addicted to all the blood and gore that is True Blood, but no. Still, that’s a story for another time.

Anyway. So two things stuck with me after this episode.

Franklin (with disdainful English diction): You do realize that I’m a vampire. You could empty every round in me and I’ll heal.

Jason: Not if I got wooden bullets.

2) Russell is one crazy psychotic vampire (not to mention creepy, carrying around his little crystal chalice of Talbot entrails…ewww). 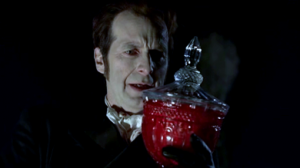 Russell: We are immortal because we drink the true blood, blood that is living, organic, and human. Make no mistake, mine is the true face of vampires! Why would we seek equal rights? You are not our equals. We will eat you. After we eat your children. Now time for the weather. Tiffany?

Overall the episode wasn’t bad, it just seemed like it was a lot of catch-up/build-up for future episodes to move the main plot along with Sookie/Russell/Bill/Eric, and attempting to wrap-up the smaller sub-plots with Jason and Crystal, Sam and his family, Lafayette and Jesus, Tara and her post-Franklin rage, Jessica and Hoyt, etc.

Speaking of sub-plots, still don’t know what the deal with Sam’s brother is or even why Sam finally loses it because he gets his buttons pushed about everyone walking all over him. So predictable! The relationship between Crystal and Jason is still annoying me, it just doesn’t seem to be going anywhere. Of course Crystal is not going to leave her “kin,” they’re her hillbilly pack. Come on already! I really think Sam’s and Jason’s characters have been undermined this season with this story direction. It’s boring and lame.

Still happy about Lafayette and Jesus but I’m just waiting for the other shoe to drop on poor Lafayette. Either Jesus is going to turn out to be some non-human or one of the other True Blood uglies is going to take him out.

Love the little scene between 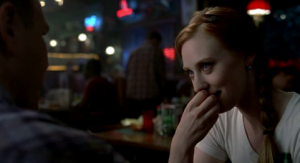 Jessica and Hoyt, especially when he tells her how much he hates Summer. That was awesome because I can’t stand Summer. I just want to crush her with my bare hands! Plus, I love Jess.

Hoyt: I [bleep] hate her. She will not stop talking!

I wasn’t sure about the addition of Holly but now I am excited to see what she brings to the table this late in the season, especially after all the tweets that she is a witch. The main question I have in my head is whether she knew what happened to Tara and said that she was a rape survivor in the meeting so that she could get close to her, just like she knew about Arlene’s baby. Speaking of the baby, when she was sitting with Arlene and Arlene was saying that her baby was evil, there was a moment there. Something baaaaad is going to happen! *shiver* 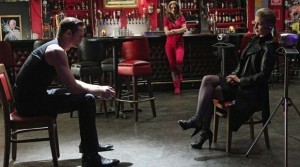 Now for the good stuff. Really loved the scene between Nan and Eric when he was being interrogated. It was good to see that there is actually an Authority or some authority anyway (a bunch of faceless guys in a room over a webcam does not an Authority make, but we shall see). Also, anyone else notice that after claiming that she only drinks TruBlood to Eric, Nan is just like any other vampire with her little human suck-toys? She certainly seems to have a lot of power for a vampire who’s supposedly just the face of the American Vampire League.

Nan: Listen, you whiny little bitch…you brought us this steaming pile of shit, and you’re going to make it go away. Now bring me his fangs or I will have yours.

Lastly, what in tarnation is Sookie? We have Bill miraculously going to her secret dream place where he meets up with Claudine, and obviously she tells him what Sookie is, but we still don’t know! Dammit. Like the twist that Hadley’s kid (Sookie’s nephew) is also the same as Sookie, but now I really need to know why the vampires all have such a huge interest in her.

I am guessing that all this is going to come together in the last couple episodes somehow as Sookie undoubtedly will have to be the one to kill Russell (possibly working together with Eric and Bill) if only because he is 3000 years old and stronger than any other vampire.

Can’t wait for the next episode! True Blood airs on Sundays on HBO at 9pm EST.

I do have to add a mini-postscript that Russell, despite being a complete lunatic, does make some good points about current society. Could True Blood be delivering a public message about excess and morality? Hmmm. 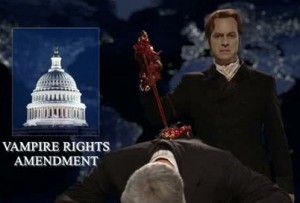 “Now the American Vampire League wishes to perpetrate the notion that we are just like you. And, I suppose in a few small ways we are. We’re narcissists. We care only about getting what we want, no matter what the cost, just like you. Global warming. Perpetual war. Toxic waste. Child labor. Torture. Genocide. That’s a small price to pay for your SUVs and your flat screen TVs, your blood diamonds, your designer jeans, your absurd garish McMansions! Futile symbols of permanence to quell your quivering spineless souls.”

That’s it! *shakes fist to sky* No more designer jeans for me!

6 Comments on True Blood: Everything is Broken