In honor of Mother’s Day 2011, I will be posting a wonderful and insightful review I received for Bloodspell from a local mother and teen daughter. It’s a beautiful thing, I think, for mothers and daughters to be able to share something as rewarding as reading. For me, it’s incredibly humbling to know that Bloodspell is one of these cross-generational books – one that can bring parents and teens closer together, and inspire open dialogue. As a parent myself, I know that being able to communicate with your children about their interests and what motivates them, is undoubtedly one of the keys to a healthy parent/child relationship. That said, thank you Shara and Diane Safer for your thoughtful review, which I shall now give you without further ado! Keep reading and reviewing together – it’s very cool! Happy Mother’s Day to all the fabulous and dedicated mothers out there! 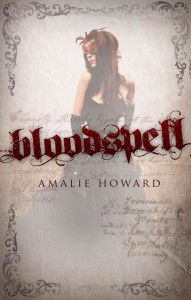 I thoroughly enjoyed reading Bloodspell.  It was a gripping read that I could not get enough of. I read it from beginning to end without even looking up. I love it when a story can take hold of you like that. It feels like you are being tossed up and down in a whirlwind, never knowing what will happen next. I might have thought that Bloodspell would fit the chick flick stereotype of books like Twilight, but I was very wrong.

When I started to read Bloodspell, I thought that it was just going to be another vampire book. All other vampire books fit a very basic stereotype. An amazingly sexy guy falls for a girl-next-door kind of person. The girl is usually helpless and slightly ditzy, and the boy is a perfect, everything-you-could-possibly-ask-for guy of everyone girl’s dreams. They fall hopelessly in love with each other, the girl finds out that the guy is a vampire, is even more attracted to him, and they live happily ever after, with the guy saving the girl from the various perils of being mortal. That’s all fine, but it gets kind of boring after a while. Luckily, there are books like Bloodspell to wake us deprived teenagers up from our stupor.

First, unlike many written-for-teen novels, Bloodspell has in its favor outstanding quality writing. There are no long-winded descriptions of the gorgeous vampire (Christian) that are intended to draw in giggling females. Amalie Howard, the author, instead describes the action and people’s feelings realistically. My personal favorite character, Angie, undergoes a change during the book. She starts off as moody and resentful, but afterwards her moods are explained. The reader can understand and sympathize with her as the book progresses.

Another thing that I highly endorse in Bloodspell is the main character. Victoria is not just the ditzy, helpless, and pretty girl-next-door you find in other vampire books. Nor is Victoria a mere mortal, she is a witch. As a feminist, I appreciate the way Victoria is able to defend herself. She has no need to call on her vampire boyfriend at the first sign of trouble. Instead, she can just summon up her own magical powers and kick the bad guy’s butt. I love strong female characters.

I have to admit, I’m one of those adults who loves young adult literature of all kinds but especially fantasy and this book didn’t disappoint.  After I was able to pry the book from my daughter’s hands (and put my other kids to sleep), I was happily transported to another world.

Like my daughter, I was drawn in from the start when Victoria (Tori), the principal character, begins to exhibit some of the magic of her powerful blood.  Tori surprises herself and the readers with an attack on cruel teens who pick on her because she seems different.

Two themes kept me on the edge of my seat for this book.  First, I was drawn to the conflicts depicted in the book — the conflict between siblings (Christian & Lucian, Gabriel & Angie) and between lovers (Victoria & Christian).  It was this sensational struggle for control throughout the book that kept me guessing.

Second, I enjoyed watching the characters learn what they were capable of doing and capable of being.  From the principal character Tori who learns her destiny and has to decide whether not to let it control her to less central characters such as Charla and Angie who eventually show their true colors, every character goes through some metamorphosis.

I would recommend Bloodspell to any tween or teen who loves fantasy and vampires, but is getting tired of the same vampire books again and again. This is a great example of a way to get away from the routine and make an old subject new and exciting.

I too would recommend Bloodspell. A great addition to the fantasy genre.  I know that the author, Amalie Howard, intended to write a novel for a young adult audience but the quality of writing and the strength of the story-line make it an excellent choice for any age.  Plus, I certainly appreciated reading a book that both my teen daughter and I could read.  Can’t wait to see what happens next!