Paris was amazing – it was everything I remembered and more. Not only did I visit all of the old haunts – the Latin 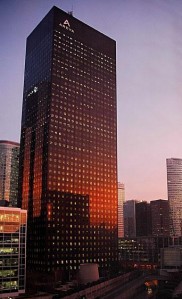 Quarter, Boulevard St. Michel, the Louvre, the Notre Dame, the Sacre Coeur and Montmartre, and even the Eiffel Tower, but I also visited places that I wrote about in my books which was an almost surreal experience – the Tour Areva in La Defense (see insert), the palace and gardens of Versailles, the Tuileries, the designer row of Avenue Montaigne. It was fantastic, breathing life into my story and my characters.

Speaking of breathing life, I did spend at least a couple nights lying in my hotel room wondering…what if, just maybe, vampires did exist and were living just where I’d said they’d be living (like around the corner from my hotel in the 8th arrondissement). It felt more real than surreal in the middle of the second night when the wind blew open the curtains of the french doors off the balcony into the room! Oh, and when I woke up, there were tiny drops of blood on my white bed linen. I kid you not! Well let’s just say those French doors remained closed for the remainder of my time in Paris, overactive imagination or not. Freaky!