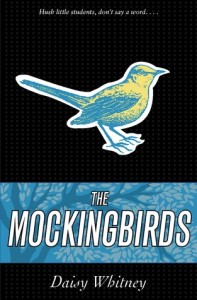 The Mockingbirds by Daisy Whitney was interesting, especially because it deals with a very real (and scary) issue, date-rape. It’s a subject that’s particularly close to me because a friend of mine was date-raped in college, and unfortunately, nothing was done in that situation. She did not feel empowered to act against her aggressor, and chose to do nothing. It’s a tough subject because there’s so much emotion around it – feelings of self-worth, shame, anger, pain, just to name a few. Like the Mockingbirds, I was also on the Judicial Board of my college (an actual jury of peers for all college-committed crimes brought forward by students) and we saw our share of pretty terrible things. But unlike Themis, we were lucky that we had that Board in place, and that the college sanctioned and supported our case verdicts.

I thought that Daisy Whitney did a truly commendable job in the way that she executed this story. The characters were well-thought out and the story was well-paced and gripping. This book did not let go of me until I read to the last page (I’m talking Acknowledgements!) And even now, I still have a lot of internal processing going on. Alex was a sympathetic and believable character – I felt her self-doubt and trepidation throughout, and I also saw her growth as a person during the course of the book. Obviously, the best thing about this book is the takeaway message (or the ones I got anyway) – about a person’s right to stand up for themselves, to understand what the meaning of date-rape is, and to stand up for those who may not be as strong. Sometimes, it just takes one.

Great book. Some themes/descriptions may be too mature for younger teens. Four and a half stars.