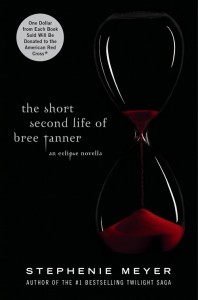 I finally got around to reading this little novella of Stephenie Meyer‘s, intended to be a sort-of companion to the Eclipse novel. The story is about Bree Tanner, one of Riley’s vampire minion crew bred to attack the Cullens as part of the redheaded vampire’s retaliation plan from Eclipse. You will remember Bree if you’ve read the book or seen the movie as the girl after the Cullen versus newborn fight who tells Carlisle Cullen that she doesn’t want to fight. He, in turn, offers her the chance to have a chance at life with them. Things don’t work out of course with emotionless and cruel Jane leading the Vampire Police Squad, so Bree is executed for her crimes. Hence the “short” in the title of the novella.

So basically this is a short story, 178 pages to be exact. Most Twilight fans will definitely enjoy this short book, if only for a bit more of the world surrounding Stephenie Meyer’s breed of vampires. Bree’s story is told after she has been turned, and chronicles her journey of discovery as a newborn vampire, her questions of the secretive Riley, her budding romance with Diego, and her odd but comforting friendship with the strangely repulsive Fred. A slave to her blood thirst, she is a vampire first and foremost, but Bree doesn’t allow herself to be manipulated by Riley, and in the end, she makes the decision not to fight in Riley’s war…the decision that causes Carlisle to take pity on her, even if she still dies.

I thought that Bree was a sympathetic character, even though it was somewhat tragic that she traded her humanity for a cheeseburger. Still, she does seem to retain more of her humanity than the others in her coven. I liked that she was strong and independent, and thought for herself.  I didn’t really care for any of the other newborn vampires and I found most of them to be quite irritating – they seemed more like brats than killers to me. Although I did like Diego more than the others, to me, he was just a foil to emphasize Bree’s vulnerability as a girl with girl-like emotions at the core despite her vampire nature. I did like Fred, and I will most likely enjoy his story if told. He was the only other cool character for me in this novella. Things do become more interesting toward the end, especially as Bree interacts with the Cullens from the Twilight Eclipse story because of the tie-ins. In terms of the pros, it’s interesting to learn about things in the Twilight world from the point of view of a newborn, and the connection with the Cullens at the end is cool. In terms of cons, it’s a very quick read (too short!) and I definitely would have liked to see more of Fred!!!

I’d rate The Short Second Life of Bree Tanner four out of five stars for Twilight fans, and five out of five for the proceeds to charity because that was definitely for a for a worthy cause!