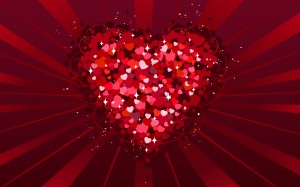 Happy Valentine’s Day everyone! So I’m going to share my own love story with you in honor of Valentine’s Day this year. This story was originally posted at Eleusinian Mysteries of Reading (as part of an awesome month-long Valentine’s Day event with lots of love stories and giveaways up for grabs – so you should definitely go check it out), but I figured I’d repost it here today as a special treat.

As an author who writes in the YA paranormal romance genre, I receive a lot of comments and feedback about the infamous “insta-love.” You know, that it doesn’t really happen that way in real life or people come together far too quickly in books for it to be believable. However, I must beg to differ because I fell in love at first sight.

The future love of my life and I had never met before. We didn’t go to high school together or sit in the same Biology class. We weren’t even from the same country! The night I met the ONE was like any other frosty evening in early February 1999, several days shy of Valentine’s Day. As was my Friday night routine, I was getting ready to go out on the town with my best friend. We weren’t at all in the mood, given that we were leaving to go to the Caribbean on vacation at 5am the next day, but we were young and not about to waste a perfectly good Friday night staying in. Plus, we’d been invited to a birthday party at a trendy lounge on the lower East Side of NYC.

A couple hours later and ensconced in the lounge, there was some commotion at the door where five tall and very handsome boys were trying to sweet-talk their way in to the private party (the owner’s birthday). They did so easily, and undoubtedly because of their looks and hot Australian accents … the hostess simply had no chance. Later on in the evening, over a pool table and some witty banter, I noticed one of the Aussie boys staring at me. He was tall and blond and so not my type, but I still said to him, “If you’re going to stare like that, you may as well come over and introduce yourself.” Yes, that’s how I rolled back then. With a raised eyebrow and a smile, he walked over and did as asked.

At first, I thought I’d been wrong and he was really interested in my best friend, so I walked away to chat with another friend. But eventually, he found me, and then we started talking. Our time together was incredibly short and before I knew it, we were outside, exchanging emails and phone numbers and saying goodbye. It was so bittersweet. I’d just met this amazing guy, and he lived a gazillion miles away in London. And I was leaving to get on a plane in an hour. Could the fates be more cruel?

But then it happened—the magic that makes the impossible, possible.

I leaned up to kiss him goodbye on the cheek, and he turned his head at the last moment, meeting me on the lips. Hello, exploding stars, sun, moon and everything else in the sky! You know in old movies where the girl’s leg raises backward with a magical kiss? I kid you not that the very same thing happened to me. And if I didn’t admit it right then that I was falling for him, I certainly did when I got home and the phone rang—it was he, calling to make sure I’d gotten home okay. He’d walked two blocks from his hostel to use a pay phone at five o’clock in the morning to call me. If that isn’t love, I don’t know what is.

Even though he lived in London and I lived in New York, we weren’t ready to let each other go just yet … all it took was that one single kiss to seal our fates. Over the next few months, we spoke every day and our long-distance relationship blossomed. He visited, I visited, and eight months later, we got engaged and he moved to NY. One year later, we were married, and this year, we will celebrate our twelfth year of marriage! My husband often tells me that he knew from that very first night that I was the one for him.

Hope you enjoyed my story, and for all you naysayers on falling in love at first sight, it can and does happen. I’m living proof. Open your heart and see what happens. Life is full of surprises … wonderful ones. You just need to be receptive to them. So rock on, insta-lovers, and Happy Valentine’s Day 2012!