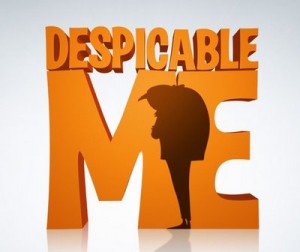 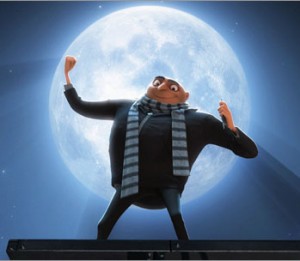 theater, complete with miniature playground, deck chairs, and honest-to-goodness speaker boxes on poles between the cars. We did get reception on a radio station so it wasn’t entirely all old-school. It wasn’t 3D but still, what a great experience!

Rated at 79% on the Rotten Tomatoes tomatometer, Despicable Me lived up to its hype. More delightful than despicable, Despicable Me is a great family film that is sweet, funny, and endearing for adults and children alike.

Surrounded by a slice of suburbia in his hidden uber-outfitted, underground lair, Gru is a super-villain who is plotting his biggest crime yet…to steal the moon. All he wants is to win his mother’s approval. With the help of three orphaned girls to infiltrate his nemesis’ lair by selling cookies, he manages to steal back a shrink-ray (crucial in his plan to shrink and steal the moon). But what he doesn’t plan for is everything else it takes to raise three little girls, like meal time, play time, telling stories, and goodnight kisses. After they turn his life

completely upside down, Gru decides to send them back to the orphanage. In the end, Gru and his Twinkie-like minions (who are hilarious – case in point, the photocopying of their bare bottoms and giggling like crazy had me in stitches), manage to pull-off the heist, but Gru realizes that what he really wants in the world is to be with his three girls. He wins his mother’s approval when she finally tells him that she’s proud of him for becoming a dad.

Gru: It’s like my heart is a tooth, and it’s got a cavity that can only be filled with children.

With a ton of great humor, Despicable Me is a heart-warming movie that will make you only want to see it again and again and again. Gru has some great one-liners as a first-time parent that were hilarious.

Gru: You will not cry, or sneeze or barf or fart! No annoying sounds.

Agnes: Does this count as annoying? (puffs her cheeks)

You can’t help but fall for the girls, especially Agnes, the one with the giant doe eyes and an unhealthy obsession with anything fluffy.

Agnes (staring at a plush unicorn at a fair): It’s so fluffy, I’m gonna die! SO FLUFFY!

She reminded me of the little girl in Monsters Inc. Super adorable!

Despite Gru’s gruff exterior, the girls look past all that, and start to see all the good things in him that would make him a great dad. Their love is immediate and unconditional. Like Gru, at the heart of it all, they just want to be accepted and loved, and find their own place in the world with a loving family of their own. 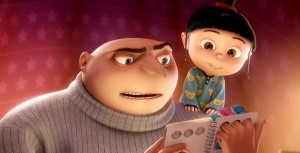 An enjoyable experience that I didn’t really expect, I would rate Despicable Me four out of five stars. The Twinkies probably warrant their own star. Absolutely loved em! I’m saving the final star for a 3D viewing which I heard was fantastic, so this rating is to be updated at some point. For now, Despicable Me is 95 minutes of superbad goodness. Enjoy!

2 Comments on Movie Review: Despicable Me