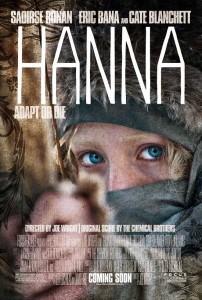 Garnering a pretty decent rating of 71% on the Rotten Tomatoes tomatometer, I was excited to see a film that was reminiscent of both Dark Angel and La Femme Nikita. I mean who wouldn’t want to see some genetic experiment gone awry with a gun-slinging, ass-kicking sixteen-year-old out for some serious retribution against those responsible? Ok, maybe just me, but you’ll only get that much from the Hanna trailer, which portrays this film as an all-out action film. Instead, this film is far more than that — because it involves a whole lot more than just retribution, the entire film is a journey … Hanna’s journey to be exact, and her tentative discovery of the world after spending all of her life being raised in some remote forest. Sure, she’s out for blood, but we see the world through her eyes as she navigates the foreign territory of “real” life.

We see her make unlikely friends, almost kiss a boy for the first time (but not quite), escape killer pursuers, and discover beauty in music and dance. The actress who played Hanna, Saoirse Ronan from The Lovely Bones, was spectacular in managing to convey a sense of childlike innocence in tandem with the cold ruthlessness of a born soldier. She was vulnerable yet tough as nails all on one, which was at times quite disturbing. Her emotions were so raw that you felt each one of them. To me, it was an interesting juxtaposition — her complete lack of emotion with a gun compared to the tremulous intensity of a moment when a friend gives her an unexpected friendship bracelet.

This is why it reminded me so much of Dark Angel – the story of a girl genetically enhanced to become a stronger and better soldier, but who rebels against her creators, and tries to find her own way in the world by making friends and having to trust new people. Like Dark Angel, Hanna is an incredibly strong and independent character, but she’s also a slave to the way she has come into the world and the brutal way she has been trained to survive in it. There’s a scene in the movie where Hanna tells her father (Erik played by Eric Bana), “you never prepared me for this,” and you just get the sense that she’s talking about life as a whole and about fitting in … perhaps being normal, which is something she will likely never be.

Visually, Hanna is beautifully filmed, with scenes shot on location in Europe and Morocco, and showcases a lot of European and Moroccan culture which was very cool. Although there wasn’t much complexity in the plot itself (it’s pretty thin actually), Hanna is an interesting, poignant film with many emotional layers that had me thinking about it long after I’d seen it. Great soundtrack by The Chemical Brothers! I’d rate Hanna four out of five stars.