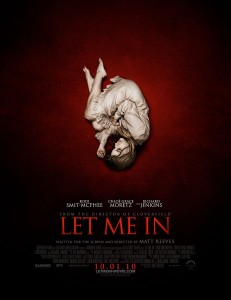 Let Me In is the American adaptation of the 2008 Swedish vampire film, Let The Right One In (which I haven’t seen for any basis of comparison, although I have heard awesome things about it). Rated at 89% on the Rotten Tomatoes tomatometer, Let Me In did not disappoint on either the horror front or the romance front. It’s not your typical vampire film, nor is it your typical boy meets girl love story. Instead, it is an amazing combination of the two, producing a compelling movie experience that is dark and terrible as it is sweet.

Owen (played by Kodi Smit-McPhee from The Road) is a young boy who gets bullied at school and spends his time entertaining himself alone in the courtyard of his apartment building. One evening, two mysterious people show up in at night and move into the building – a young girl and her father. But Abby (played by Chloe Grace Moretz from KickAss) is no ordinary twelve-year-old girl, she is a centuries year old vampire. Despite her warning to Owen that they can’t be friends, they are drawn together by a shared loneliness and a relationship starts to form. The core of this film really centers around these two young people – their dialogue, their shared silent glances, their emotions, and their budding feelings for each other. Their relationship is dark and sweet because you can’t help becoming invested in them and what will essentially be a doomed romance, because Abby is what she is. On that note, I thought it was incredibly poignant when we learn exactly who Abby’s father is, and know that that will also be Owen’s fate, should he choose to stay with Abby. 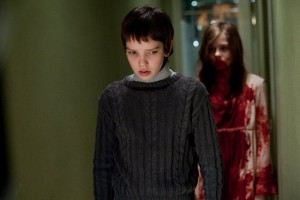 Sweetness aside, this film also has enough horror and shocking moments to have had me covering my eyes. Abby is terrifying as a quick-moving, evil-eyed vampire with her snarling blood-drenched mouth, leaving you in no doubt of the creature that she is. She rips into flesh like nobody’s business, snapping necks and tearing bloody chunks out with her teeth. Even Abby’s father who garbs himself from head to toe in a black garbage bag is creepy and frightening when he goes hunting for Abby. The scarier parts of this movie only add dimension to the sweeter parts, like Abby and Owen’s interaction, and it just makes you feel for them more because there’s no “happy ever after” for them. He’ll kill for her, protect her, feed her, and she’ll leave him behind when he gets too old … just like the boy-turned-old-man before him. It’s so tragic.

I thought Abby was a complex and fascinating character. She drew me in because she’s doomed to be a child forever trapped in the life of this monstrous vampire, and a lot of how she is comes across as very childlike. For me, she was as good as Kirsten Dunst in Interview With A Vampire. Like Kirsten, she played the vampire versus the child amazingly well – the violent growling at her father for 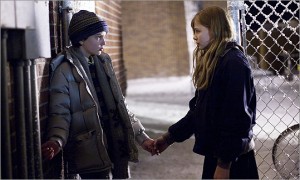 not getting any blood versus the sweetness of her normal girl voice is incredible. Her ability to be both monster and innocent was phenomenal. I don’t think she’s manipulative and scheming as suggested by other reviewers in terms of looking for someone else to take care of her. She tried to leave Owen for his own good, and ends up coming back to save his life. So that for me, erased the whole thought that her actions were contrived to make Owen fall in love with her. I think she also fell in love with him, and she knows that he protected her, too.

Owen was also a complex character, although in a different way, almost an opposite way to Abby. He’s a powerless bullied kid who wants to awaken the monster inside of him – he wants to punish his tormenters. This is evident when he’s stabbing the tree with a penknife, hissing “you scared, little girl?” It’s interesting because he’s afraid of a few kids, but yet he’s able to face and even love the utter terror of a creature like a vampire.

I especially loved the juxtaposition of Let Me In with Romeo and Juliet, which Owen was reading in school, in terms of highlighting the beauty and tragedy of their relationship. Let Me In is a beautiful and terrifying film. I couldn’t stop thinking about it for hours after I’d seen it, especially about Owen’s eventual choice and the cost of such a choice. It was both bittersweet and chilling.

Superbly acted and one of the best vampire movies I’ve ever seen, I would rate Let Me In 5 out of 5 stars.

2 Comments on Movie Review: Let Me In