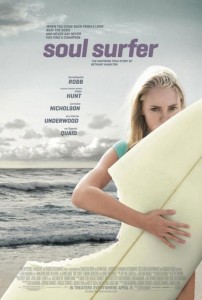 As a surfer myself (yes, the surf on the Atlantic coast of Long Island is very surfable, although not as gnarly as the waves in Bells Beach, Australia), I felt compelled to go see Soul Surfer. The ratings on the Rotten Tomatoes tomatometer weren’t exactly inspiring at 53%, but I went with the audience goers on this one … who voted it a whopping 87%! And they were right!

This film is about faith, family, strength, and the resilience of the human spirit. It is the true story of competitive Hawaiian junior surfer, Bethany Hamilton, who lost her arm to a 14-foot tiger shark on Kauai’s North Shore at just thirteen years old. I remember reading about her story on the news years ago with horror, if only because I thought she wouldn’t be able to surf (or go into the water) ever again. But Bethany proved many people, including myself, wrong. Not only did she go right back into the water a month after her attack, she went on to win the NSSA National Championship barely over a year later in 2005.

From a movie perspective, I really enjoyed watching this film. The surfing and spectacular cinematography were awesome to watch, and I really fell for the tightly-knit and well-grounded Hamilton family. Dennis Quaid and Helen Hunt were incredible as the cool but caring parents, and Anna Sophia Robb was perfect as the young Bethany. The story was well-paced and kept me interested from start to finish. I felt emotionally connected to all of the characters, who had terrific and believable chemistry, including Bethany’s brothers and her best friend. On a teeny side note, the only character I didn’t really feel was Carrie Underwood who seemed very stilted next to the fluidity of some of the more seasoned cast members. 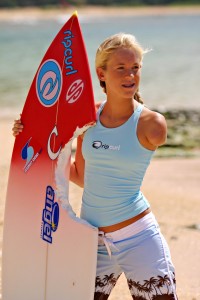 I loved at the end of the movie when Bethany was asked by a news reporter whether she would have gone surfing if she could go back to that day, and she responded that she wouldn’t change what happened because she has embraced so many more people with one arm than she ever could have with two. I may very well have welled up at that moment. But my favorite part of it all was the footage of the real Bethany Hamilton when the credits were rolling! She’s truly an inspiration to anyone who has faced or is facing tragedy or adversity of any kind, whether it’s big or small.

Great film with a solid cast and a timeless uplifting story, and one that I would recommend wholeheartedly for anyone. I’m going to buy a copy for myself when it comes out, it’s that good in my opinion. And boy, do I feel like surfing right now! Although, the thought of putting on a wetsuit, fleece rashie, hood, booties, and gloves is a little daunting. Maybe I’ll wait for late Spring!