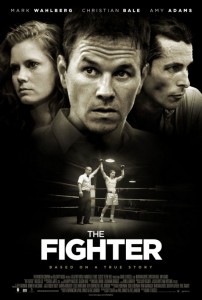 The Fighter was wicked awesome! Boston accent aside, what a fantastic film! First of all, I am a huge Mark Walberg fan (as far back as his underwear-slinging days), but it was Christian Bale who blew me away in this film. I find him a normally very rigid and serious actor, and to see him in this very loose “crackhead slash ex-boxer” role was really eye-opening. He was absolutely hands-down the bright star in this film. Amy Adams was also no slouch in the acting and right-hook department, playing Mark Walberg’s girlfriend and standing up to his outspoken and in-your-face family. The cast was undoubtedly the driving force behind this movie’s success.

The Fighter is based on the life of boxer “Irish” Micky Ward and his brother, and their road to a boxing championship. The heart of the film is about the struggle of doing whatever it takes to follow your dreams and never giving up…even when your biggest obstacles are those closest to you. It’s not an original story by any means – underdog sports guy somehow 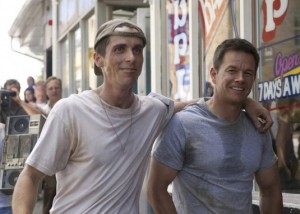 manages to triumph in the face of insurmountable odds to achieve his dream. That said, what differentiates The Fighter from other movies of this ilk, was the amazing cast, whose Oscar-worthy performances really gave this film so much of its gritty punch (no pun intended).

There’s a lot of heart in this film, with a ton of emotion ricocheting between each of the very unique and colorful family members. The relationships, particularly between Micky and his brother (his trainer), and between Micky and his mother (his manager), are so fraught with tension and a love/hate mix so suffocating, that it was painful to watch at times. Both brothers have to face their own demons (Micky stepping out of his brother’s local legend shadow – he KO’d Sugar Ray Leonard; and Dicky fighting his own crack addition and being a father), before they can figure out how to come together to win the championship. Micky’s 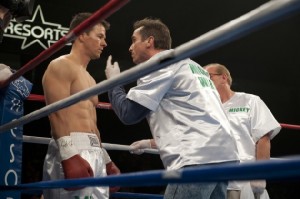 relationship with his mother is even more skewed because he has always come second-best to Dicky. His mother can’t see past her first son to support her second son, who has the talent to go all the way, and nearly destroys Micky’s career in her blind love for Dicky. Eventually, Micky separates from his family to follow his own path and carves a name for himself, despite his mother and Dicky. However, since a key message of this film is the value of family no matter how skewed, Micky does reconcile with them in the end. It’s a completely disruptive and dysfunctional family but somehow they manage to stick together and make it work.

From a cinematography perspective, I love how this movie was filmed, with close-shots and grainy coverage. It felt very real and more documentary-like than a movie. The boxing was incredibly real and believable. The punches in the fight scenes weren’t “doctored” and for someone who sees a lot of movies with blood and gore, I was cringing at some of those scenes. They were very raw, and very realistic. Add that to the stellar cast and a feel-good underdog story, and you’ve got gold.

All in all, The Fighter was a fabulous film with great acting and a great story. I would rate it 4 out of 5 stars.