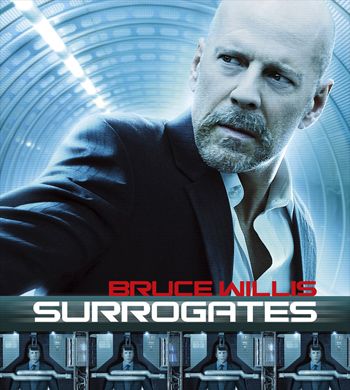 Think Blade Runner mixed with a little bit of I,Robot and A.I., with a twist of Total Recall and Strange Days, and that’s what I thought Surrogates was going to be. I really, REALLY wanted to love this film. The concept just seemed so cool. Surrogate robots designed to allow paraplegics, or severely ill and disabled people, to live active lifestyles (by linking the robots directly into a person’s neural system). In the film, when the technology goes mainstream, things get complicated. Crime goes down, society becomes more utopic….life is wonderful. Not so much – especially when the inventor of the surrogate technology decides he has created an abomination, and wants to end it all. He develops a weapon with a virus that destroys the surrogates but has a nasty side effect of killing the host human. Still, he is willing to sacrifice over a billion people using surrogates to correct his mistake.

Sounds interesting, right? Like I said, it has so much potential which, unfortunately, was just not realized in the 88 minutes of this film. Even the relationship between Willis and his wife felt superficial, not because of the surrogates, but it just had no depth…no soul, a feeling which extended into most of the film for me. Let’s just say Wall-E got it right – what happens when you sit around in a chair having robots do things for you? Yep, you get fat, you lose bone density, your muscles atrophy. Apart from a brief glimpse of a pallid-looking Radha Mitchell, most of the people using their surrogates seemed pretty unaffected. That took away some of the realism for me.

There’s no way I can ever get back those 88 minutes or my $9. I kind of wished that I had a surrogate watching it for me. As much as I adore Bruce Willis, I am sorry to say that Surrogates was way under par. While the script was a great concept, I just don’t think it was executed as well as it could have been. The cinematic screen effects of the “doll-like” surrogates were pretty good especially in a couple of the action sequences but overall it just fell flat. Willis is a big screen personality with a lot of street/blockbuster cred, and frankly, I expected more.