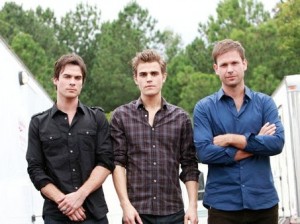 I thought this was an ok episode but it didn’t draw me in as much as I thought it would have. It was a bit boring overall, and it seemed like a set up for future installments of the Vampire Diaries, especially with Pearl and Anna, as well as Isobel, Elena’s birth mother.

Melinda Clarke as Matt’s mother was interesting just from an expanded cast perspective but I’m wondering where they are going to go with it. Damon’s demeanor post Katherine is almost as bad as the old “nasty” Damon especially after what he does to Alaric at the auction. That was cold. I miss the bad boy with heart. The whole thing with Alaric getting staked felt overdone to me, especially when he wakes up and says his ring protected him (the one, his wife Isobel gave him).

After such a long hiatus, I expected a bit more but I guess they’re starting small and building from there. I didn’t really feel it this week.

3 Comments on The Vampire Diaries – A Few Good Men