And the Vampire Diaries has finally redeemed itself! Great start to the episode with Pearl laying a giant beat-down on Damon and gouging out his eyes. Way to start with a bang! Not to mention the old house full of escaped scary pissed-off vampires from 1864 waiting to make good on the Salvatore brothers. Pearl is turning out to be Queen Vampire Nasty. She definitely means business. It’s kinda strange to see Damon, normally the ruthless bad-ass vampire being schooled by someone far worse.

The double date was a little weird but I guess they had to have some filler although it was pretty cool to see the four of them interacting together. Nice to see Stefan trying to make some friends outside of Elena. 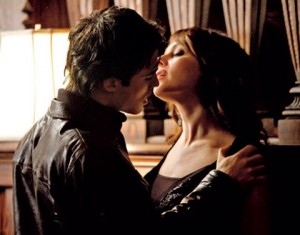 Damon cougaring it up with Matt’s mother was another classic Damon moment. I loved Caroline’s comment after they got to Stefan’s house.

Caroline: This is much better than watching Damon visit Cougar-town.

o go Jeremy! Slicing his hand open with Anna and letting her drink his blood. Took some guts – I liked seeing that a lot. Jeremy can be so wishy-washy sometimes so it was great to see him take charge. He also has a new look, like the sassy cuteness. I’m just not too sure about him wanting Anna to turn him. It was too predictable. So basically now we have a brother and a sister both fraternizing with vampires, and hiding the fact from each other.

Overall, not a bad episode at all. Enjoyed all the drama and the slowly building tension of Pearl’s endgame. Very interesting. Looking forward to next week’s episode. The Vampire Diaries airs on Thursdays at 8pm on the CW.

3 Comments on The Vampire Diaries: There Goes the Neighborhood

1Pingbacks & Trackbacks on The Vampire Diaries: There Goes the Neighborhood