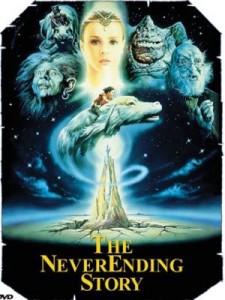 In the rush of all the new modern fantasy novels, television shows, and movies, I wanted to write about a true fantasy classic, The Neverending Story. I’ve seen this movie about twenty times, and each time it just doesn’t get old. It doesn’t have to have the most advanced CGI or special screen effects, it’s all about the story: a boy, a book, a quest to save an empress, and a fantasy world called Fantasia.

When Bastian, a sensitive boy who gets bullied at school, finds a book called The Neverending Story, he starts reading and gets drawn into a fantasy adventure of a boy’s quest to save Fantasia from a terrible thing called the Nothing. Bastian follows Atreyu, the hero in the story, through h

is quest to find a human child to save Fantasia, fighting his fears and finding courage along the way, until the fantasy world and the book merge into one. Bastian realizes he is the human child Atreyu has been seeking, and is the only one who can save Fantasia from total obliteration.

I still cry when Atreyu’s horse sinks to his death in quicksand. My heart races when Atreyu runs between the statues with the lasers. And that black wolf still scares the pants off me even though it looks little more than a stuffed muppet wolf. And who doesn’t love the coolness of Falcor, the luck dragon?!