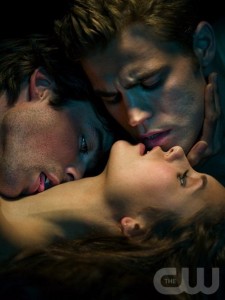 OMG – Stefan and Elena totally did the deed. Yep, she finally gave it up to the vampire behind Door #1 – Stefan Salvatore. They (the writers, producers, etc.) had me at “I love you” and the first vamp-face scene, and then lost me. How do you go from getting all vamped-out from kissing and then nada. At least have some pillow bite scenes or something! Ok, I get that it’s PG13 but he’s a VAMPIRE for crying out loud – it doesn’t go away when you would think things would heat up some! Ok fine, the gratuitous shots of Stefan’s manilicious abs made up for it. A little.

And seriously does Caroline just have a sign on her forehead that says – “hey vampires, I enjoy long walks at night, candle-lit beat-downs by vampires, come get me!” Wow, she just walks into it every time. First Damon and then Logan…well almost. Nice face-plant on the window. Ouch! On that note, I’m glad that Logan got staked. He sucked. Way too smarmy for me. Boy did I enjoy the part where Stefan gave him the “don’t ever threaten me” smack-down. Nice. Little vampire machismo never hurt anyone…or ratings.

So what’s with the “I’m just cranky lately” Tyler and the slow camera zoom of the moon – werewolf anyone? No stones unturned here. I do have to say that I am a big Jeremy fan. I really hope that they do something cool with him. He’s a cutie.

Questions of the night: How did Logan get turned? What’s with Katherine and her cronies? Aren’t they supposed to be dead/trapped? Or slumbering in the tomb? What’s with Alaric’s ring? Is he a relative of Stefan/Damon’s? There was a lot of “ring” talk in this episode which makes me wonder about the connection between them all.

Let’s just hope the thing Elena runs into is not a maenad. The True Blood fans know…just can’t deal with another one of those…

The Vampire Diaries returns to the CW on January 14th 2010.