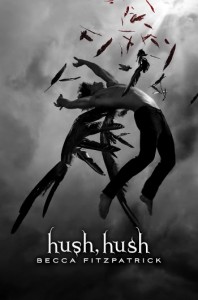 Hush, Hush by Becca Fitzpatrick was a quick read. I have to say that I enjoyed it very much. The language flowed well and was mostly driven by dialogue as opposed to descriptive scenes. Although I tend to favor descriptive language more than dialogue, I really liked the pacing of the dialogue and was completely drawn into the story.

A brief synopsis: Patch is a fallen angel who is doomed to roam the earth. The only time he can feel anything is when he takes control of a Nephil’s (half angel/half human) body for 2 weeks during the Hebrew month of Cheshvan. He has been using the same Nephil, Chauncey, for many years. According to the Book of Enoch, he has two choices – “he can kill a Nephil vassal andbecome human” or he can “save a human life and become a guardian angel.” When he meets Nora, a descendant of Chauncey, he falls for her, and faces the most difficult choices of his life because he can sacrifice her to become human or remain fallen forever to be with her. Chauncey shows up pretending to be another high-school boy, Jules, and tries to kill Nora, but she tricks him sending him to his death by sacrificing herself to save Patch. Patch refuses her sacrifice and she returns from death. Patch becomes her guardian angel.

I think I need to read the book again where Jules/Cauncey dies to see how he dies because he’s supposedly immortal. I think I missed that. Other than that, and the slightly annoying fact that Patch calls Nora “Angel” the whole time (little cheesy for me), the book was a pretty decent read. I thought that Nora was a sympathetic character, and I liked how selfless she was at the end. I also really liked Nora’s best friend Vee even though I think she needed to be a little bit stronger, and not just give up on her best friend, despite the “thoughts” being placed in her head by Jules/Chauncey.

Hush, Hush kept me interested until the end. Great story with interesting characters. Overall, I would give Hush, Hush 4 stars. Teen readers will undoubtedly enjoy!