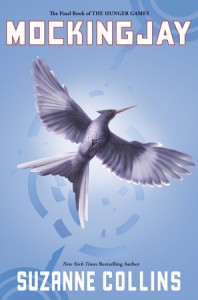 So here it is, as promised, the final installment in the phenomenal Hunger Games series by Suzanne Collins, my review of Mockingjay. After my positive reviews of The Hunger Games and Catching Fire, I had some high expectations for the final book. I was not disappointed. Mockingjay was everything I wanted and more, all in all, a great conclusion to an exciting and can’t-put-down series. But be forewarned, it’s nothing like the previous two…it’s dark and violent and brutally honest.  You may love this book or you may hate it, but there’s no denying that it will take you on a sublime roller-coaster of a journey.

As I mentioned in my review of Catching Fire which offered a preview of what the world would be like in Mockingjay, this unconditionally is a book of war. The world is bleak and filled with death. It is in fact a real-life version of the Hunger Games, only the world is the arena and there are no rules nor “tricks” to defeat the Gamemasters. The single ray of light and hope is Katniss Everdeen, the symbol of the revolution and its Mockingjay. But she is still under the thumb of the covert underground District 13, which of course has its own agenda…of power, control, and authority. The driving objective of the book, and our heroine, is to kill President Snow and overthrow the Capitol. In the end, Katniss does make it to the Capitol with the help of her combat team, and she does bring down President Snow, but not before losing almost everything that she holds dear. In Mockingjay, loss is simply a casualty of war where the luxury of mourning no longer exists. It is brutal, immediate, and final.

If you’re looking for a romantic conclusion or a romanticized version of Katniss being an all-conquering heroine who takes up the mantle of power as the leader of the revolution, look elsewhere. If anything, Mockingjay shows that she is human, and in the end, just a teenage girl struggling to fulfill a role she never even wanted in the first place. So what if she runs and hides in closets? I don’t see that as weak, I see that as human. She is flawed and frail, as are we all. I think that that was a very realistic portrayal of being under that kind of pressure and suffering from a very real post traumatic stress disorder. It made Katniss more of a hero to me than anything else because it was so believable. It was raw and it was real.

The whole new dynamic between the tortured Peeta and Katniss was also very real. Teens have enough problems dealing with the opposite sex even without trackerjack venom playing mind-tricks between them. In my opinion, I thought that dynamic gave a lot more substance to their relationship especially with respect to the epilogue, because they actually worked to make their relationship happen. He wasn’t just Peeta from the other two books doing all he could to sacrifice everything for Katniss. By the force of the Capitol’s torture, he hated her, which meant that they had to find each other through all of that hate and doubt and fear, for their relationship to make it. And somehow, they managed to do just that which to me is incredibly hopeful.

I think Suzanne Collins is a brilliant writer, and what she did with Mockingjay was perfect. Although the story continues from the first two books, this book is completely different. It is gritty and raw in a way that the other two weren’t. There’s no fluff, no sugar-coating of personality nor of emotion. It is a world of pain, anger, and self-doubt…a very dark place. Some people may not like it or may feel that Collins deviated from the other two books. I disagree. I think what she did with Mockingjay was phenomenal. Gale became what he always had been even from book 1, The Hunger Games – he became a hunter, a soldier. Even though he and Katniss had a relationship, I always thought there was a hardness about Gale, perhaps born of the difficulty of his life. In a way, I think one can draw a parallel between Gale and Katniss, because although everyone (including the author) says that she is cold and all about her own survival, I actually think that that’s false. If she was, she wouldn’t have so much doubt and run away to hide in closets – this emotional fragility gives her a softness that is the antithesis of Gale. He is the consummate survivor. I wasn’t surprised when the war became his driving objective, and he and Katniss grew apart. I don’t think that Gale was vilified at all in this book, I think he just became what he was meant to become all along. A fighter and a leader. He, probably, was the least broken character in this book, which naturally made him one of the strongest.

On the flip side, I do have to say that there seemed to be a lot more in this book related to the war and the revolution as opposed to the characters or their emotional relationship with each other. Considering how central Prim has been to the book and to its heroine, I was surprised that her death felt so flat to me. It was almost too quick – there was not enough homage paid to her death. Same with Finnick, another central character and friend to Katniss, who just died. Their deaths felt hollow and empty. A part of me understands that Collins is on a new direction with this book–namely the emotionless callous nature of war–so maybe she was trying to convey more of a jarring casualty of war death as opposed to an unexpected (and more sacrificial emotional death like Rue or Mags in the previous books).

This takes me to the whole debate about Katniss’ last objective–to kill President Snow–when instead, she kills Coin. I honestly believe that this was Katniss standing up for what she felt was the right thing to do. Instead of being driven by hate to kill Snow, she knew that Coin was only in line to be the next dictator of Panem. What she did made it possible for Paylor (who seemed to be a good leader earlier in the book) to be voted in as President. This final act is certainly not the act of a pawn. Yes, Katniss is a broken fragile heroine (which apparently has upset many people who desperately wanted her to rise to the occasion and be a Hollywood hero) but she still manages to do the right thing for Panem. Doesn’t that make her a true hero? There’s a lot to be said for that, and I give her total credit.

At the end of the day, these characters have survived a war. They’re not going to be all warm and fuzzy and blindingly happy. They are going to be broken and messed up, just trying to find a way forward day by day. Talk to any war veteran and you will see that what Collins has portrayed in this novel is not only a realistic expectation of the circumstances, but it is also a brutally honest and painful one. Other reviewers have said that if you want a fairy-tale, this book isn’t for you. But the truth is, the fairy-tale is in there. It’s just not where you would expect it. In my opinion, it is in the human capacity for strength, hope, and our innate ability to survive, putting one foot in front of the other and not giving up. Katniss and Peeta, as broken as they are, manage to do that despite all the ghosts that will more than likely forever haunt them. And that’s a fairy-tale ending too, if only for the fact that there’s beauty and hope in such strength.

I am in awe of this book, and of its author, Suzanne Collins. One of the biggest compliments is how torn readers are in their opinions, which in my view, just goes to credit the author because she is able to illicit such a passionate response from her readership. Brilliantly written and honestly executed, I would rate Mockingjay 5 out of 5 stars.