Overall not a bad episode of the Vampire Diaries. Love the fact that things are heating up with the whole vampire/werewolf dynamic, and especially getting to see Mason shirtless. Sorry, I didn’t mean to throw that in the second sentence of this post! (but seriously I just re-watched the episode and I think I started stuttering).

Shirtless Mason aside, to recap, Caroline is a baby vamp currently being schooled by Uncle Stefan who convinces Bonnie to create a ring for her so that she can walk in daylight. Caroline cozies up with Matt, ends up biting him, and decides to take the high road making him b 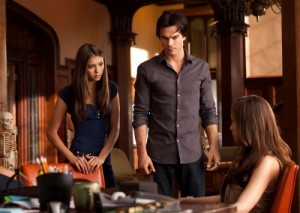 reak up with her for his own safety. Meanwhile, Damon, Alaric and Elena make a trip down to Duke to check our Isobel’s research on werewolves in Mystic Falls and realize that Stefan and Caroline may indeed be in danger as a werewolf bite is fatal to vampires. And in danger they are as it is a full moon (and a bad moon as the title of this episode implies), and Mason Lockwood (be still my beating heart) is forced to succumb to the werewolf curse. In wolf form, he attacks Caroline and Stefan, but in the end is fended off by none other than his nephew, Tyler Lockwood. I also need to mention that Tyler is also the one who gives Mason back his pants. Um, yes, his actual pants.

Moving on from the pants, I actually love Caroline’s character as a vampire even if it is amplified. She’s pretty funny, love the self-deprecation. “So you’re saying I’m basically an insecure neurotic control freak on crack.” And of course seeing that kind of wry humor in Stefan is a welcome break from his perpetual broodiness.

I was laughing out loud at some of her lines, which seemed to be quite Damonesque to me. Could it be that because he’s the one who made her? Probably not, but still an interesting thought nonetheless.

Caroline to Stefan: Everyone’s at the swimming hole and Matt is there, and he finally told me that he loves me, but I’ve been blowing him off, and now you want me to eat bunnies, and I’m kinda freaking out, ok!

Speaking of Damon, glad to see that he did have his witty comebacks in form despite his constant and annoying (not to mention undeserving!) groveling to Elena.

Research Assistant: Can he hear us?

Damon (from across the room): No that would be creepy.

Research Assistant: Can he read minds too?

Damon: You know, if you want to see me naked, all you have to do is ask.

It was nice to see so much of Damon in this episode, but he sadly gets shot down in the end when he admits to not knowing that Jeremy was wearing the ring when he broke his neck. Hello…never confess something that you know will destroy your friendship and then ask ‘will we still be friends?’ That’s just suicidal.

Thought Elena was a bit annoying in this episode but what’s new… “I’ll never speak to you again if you blog that I’m annoying!” Um, I’ll take a chance on losing you forever, unlike Mr. Pansy-ass Damon. Nice parting line that she’s more like Katherine than she thinks. That’ll show her.

And of course, enter Miss Katherine herself at the end of the episode to her soon-to-be new blood buddy, Caroline. “Don’t be frightened. We’re going to have so much fun together.” Playing hopscotch is my guess.

One final note that I must comment on is the CW’s form for the werewolf. I thought with all the chains in the dungeon of

the Lockwood Estate that there was going to be some serious Lycan-like wolf evolution. Instead, the producers of the show elected to go the True Blood route…with a plain old wolf for the were-form. I have to admit that I was a little disappointed, I was looking for something more especially after seeing Mason just before he was about to change with all the sweating and the grunting and the pawing at the ground. I felt a little let down after the whole shaking up of the car when only an ordinary wolf jumps out.

But that’s just me. At heart, I could just be an Underworld type of girl.

The Vampire Diaries airs on Thursdays on the CW at 8pm EST. Tune in this week to see Elena come face to face with her nemesis and look-alike, Katherine. GO TEAM KATHERINE! Just kidding…but not really.