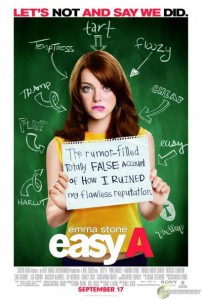 I love, love, love this movie! Easy A was everything any girl (or boy for that matter) could want in a fun, sassy, and smart film. Dipping into one of the big issues of teen culture, gossip, and the way it can negatively impact teenagers, Easy A goes the route of The Scarlet Letter, a 1950’s work of romantic fiction where its main protagonist is forced to wear a letter “A” after committing adultery as a symbol of her shame. Though adultery isn’t the theme of this film, it still highlights the role of labels on what is socially acceptable in the high school world, namely sex and sexual behavior. The tagline of the movie’s website “let’s not and say we did” says it all. Rated at 86% on the Rotten Tomatoes tomatometer, Easy A gets an “A” in my book!

Principal Gibbons: This is public school. If I can keep the girls off the pole and the boys off the pipe, I get a bonus.

In synopsis, after little white lie about the loss of her virginity to her best friend goes viral, Olive’s flawless reputation gets tarnished. Branded ‘sexually active,’ suddenly at school she’s not so invisible anymore. After a friend who is secretly gay asks for her help to dispel rumors that about being gay — “I am tormented every day at school. Just one good, imaginary fling” –, things take a turn for the worse. Olive agrees to have fake sex with him at a house-party. In thanks, he gives her a gift card to Target. Things are now on a roll as another non-popular kid asks for her help to be cool by having fake-sex with her. Olive, with her compassionate and overly-soft heart despite her sassy biting wit, agrees and receives a gift card to the Home Depot. Hopefully you’re getting an idea of how things are starting to snowball.

Fake-sex + gift-cards + gossip = very bad combination. You got it.

In defiance of stereotypical labels and lynch-mob persecution, Olive decides to wear a scarlet letter A on 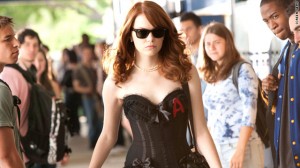 very provocative clothing (in the film it’s called whore couture), essentially flaunting the label she doesn’t really deserve. “A is for Awesome.” However, in the end, the weight of her decisions become very heavy, and Olive is caught in something that she can’t get out of. Her reputation takes over who she is and she starts to lose her sense of self, “The rumors of my promiscuity have been greatly exaggerated.” Luckily, “Lobster Todd,” a longtime friend (and secret crush) comes to her rescue. He doesn’t believe the rumors, and with his help (promising streaming sex action live), Olive does a web-cast giving “her side” of the story. Fake rep, demolished. She and Lobster Todd live happily ever after, and she closes her web-cast as promised “with a bang, not a fizzle.”

Olive: I think I’ll lose my virginity to him. Maybe in five minutes, maybe tonight, maybe sixth months from now, or maybe on the night of our wedding. Either way, it’s really none of your business. 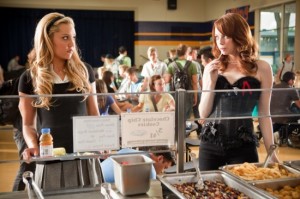 An upbeat social commentary, Easy A captures the teen angst of having to fit in, whether it’s because of sexual orientation, being overweight or the nerdy kid, or just being different. In the vein of the John Hughes 80’s films like The Breakfast Club, Easy A takes a sarcastic but heartfelt stand against the social labels of high school and the capriciousness of reputation. Emma Stone is the perfect protagonist with just the right mix of strength and vulnerability. Olive’s whimsical hippy-cool parents were a great addition to the cast, offering her helpful (and hilarious) advice but also allowing her to make her own decisions.

All in all, Easy A came together incredibly well in both cast and script with a lot of witty, fast-paced dialogue, and hilarious interaction. Although it’s very Olive-centric and narrated entirely from her point of view, it still had a lot of depth and dimension. I thought that the plot and tie-in to The Scarlet Letter was a great parallel, and I especially liked how Olive turned that around and wore the label. Even though it eventually started wearing her, she still manages to overcome and defeat it. Like most other teens, Olive is just trying to define herself against a whole host of outside influences, and just wants to be happy.

Olive: Whatever happened to chivalry? Does it only exist in 80’s movies? I want John Cusack holding a boombox outside my window. I want to ride off on a lawnmower with Patrick Dempsey. I want Jake from Sixteen Candles waiting outside the church for me. I want Judd Nelson thrusting his fist into the 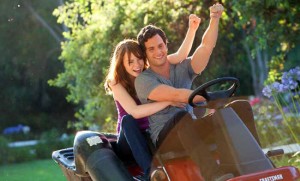 air because he knows he got me. Just once I want my life to be like an 80’s movie, preferably one with a really awesome musical number for no apparent reason. But no, no, John Hughes did not direct my life.

Luckily, she gets her wish. I especially love the touch at the end where Penn Badgley (Lobster Todd) shows up with the speakers and the lawnmower reminiscent of two John Hughes classics, Say Anything and Can’t Buy Me Love. Awesome!

Not just because I’m a huge fan of John Hughes’ films, Easy A was a home-run for me. Emma Stone is this generation’s Molly Ringwald, only hotter, smarter, and way sassier. It’s a great teen comedy with a good message, awesome cast, fun dialogue, and tons of faux-sex…what’s not to love? Overall, I’d rate Easy A four out of five stars.

9 Comments on Movie Review: Easy A