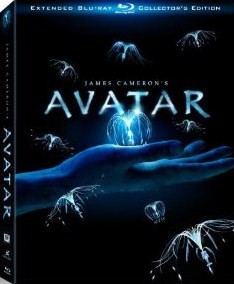 Thanks to a friend of mine (thanks Gordo!) who always keeps me up to date on what I should read, watch, and blog, here’s a quick post on the Avatar Extended Collector’s Edition DVD which is now available for pre-order on Amazon.com. It will be released on November 16, 2010.

According to Amazon, this special three-disc set contains three versions of the film, including the never-before-seen extended cut with an alternative opening. On Blu-ray, you’ll also get more than eight hours of bonus materials, including 45 minutes of deleted scenes, a feature-length documentary, screen tests and on-set footage, the “Pandora’s Box” disc of interactive features that let you explore the movie’s revolutionary technology, and more. The DVD set has deleted scenes and a feature-length documentary as its bonus materials.

I’m a little peeved at the huge difference between what’s on the Blu-ray discs versus the DVD, but it’s a big jump in price between the two. *Sigh* Beta to VHS all over again. Maybe one day I’ll eventually get the Blu-ray. But that’s a topic for another time.

Get your copy of the Avatar Extended Collector’s Edition at Amazon.