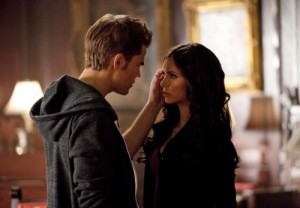 Overall this was a pretty cool episode of the Vampire Diaries. The opening was great with a scene from 1864 at the very first Founder’s Ball and then switching to a present day love scene between Elena and Damon. Don’t get excited…it’s just a dream.

Stefan wakes up from the nightmare, but it’s still not over. He flies out of bed realizing that it is Katherine and not Elena sleeping next to him, and she’s the one who was manipulating his dreams. Naughty Katherine. Stefan tries to attack her and she cavalierly says “We both know I could rip you to shreds and do my nails at the same time.” But man oh man, does Stefan ever “man-up” with a little trick of his own, getting close to Katherine only to stake her in the back with vervaine. Nice move, brood-boy. Now down to the basement for a little vamp-on-vamp torture. Woohoo! 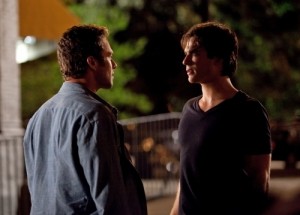 indeed a werewolf. Jenna still hates him but he’s on a mission to do two things – 1) win her over, and 2) shred a werewolf with some silver.

In the midst of a few more snarky back and forth comments that only reveal that they both know what the other is, Mason tells Damon that he’s not into igniting an old feud. They shake supernatural hands, and all is well for the moment. Until Damon of course being Damon grabs a silver knife and stabs Mason in the back…um, chest. Turns out that silver is just a myth, but it’s game on folks. Werewolf versus vampire. Feud re-ignited.

Elena, meanwhile at the BBQ, is getting worried that she hasn’t heard from Stefan and decides to go find him. Caroline, who is now under the influence of dear Katherine, tries to stall Elena, even going as far as emptying the air in her tires. When that fails she resorts to plain cold insults.

Caroline: You’re human. He’s a vampire. You’re going to be seventy in diapers, and he’s still going to be smoking hot.

Ouch. Still kudos to Elena for doing a little hair flouncing of her own and walks off intent on getting to Stefan, who incidentally is still wrapped up in Katherine’s back-flashes of 1864.

But surprise, surprise, Katherine’s made herself immune to vervaine and turns the tables on poor Stefan. Just as she’s about to have her way with him, Elena shows up and drumroll please…we have the very first Elena/Katherine face-to-face confrontation. 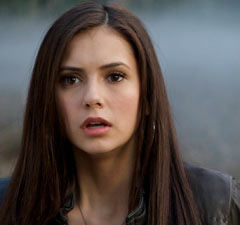 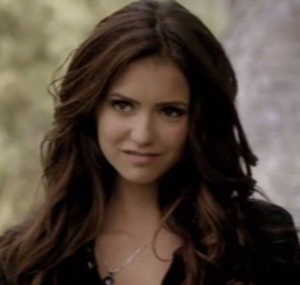 I wasn’t disappointed. Katherine was a sultry and dangerous vampire, and Elena was the trembling face of human fear and frailty. I really liked seeing the differences between them even though they are identical in face.

Elena: How is it that we look so exactly alike?

I thought it was cool (and real) that you could see Elena’s very real fear because even though she says that she isn’t afraid of Katherine, you’d have to be a fool not to be. I mean she singlehandedly masterminded the elimination of all the vampires in Mystic Falls working with the Lockwood werewolves with her own escape secretly worked in, all in exchange for a mysterious moonstone. Looking forward to seeing exactly what that little stone does, especially now that Mason has revealed how the curse works to Tyler – to become a werewolf he’d have to kill someone. 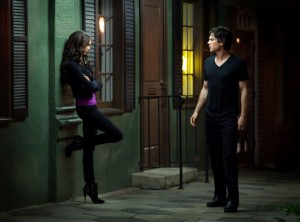 Lastly now that I’m on my rant train, poor Damon, always getting the wrong end of the stick, particularly the “I-don’t-love-you-I-love-Stefan” end of the stick. I’m sure it was supposed to be a tender touching moment when Katherine flashes back to Stefan and Damon after they’d been killed, and she whispers to Stefan that she loves him, but instead it was mildly irritating. Ok fine, maybe it was a little bit sweet. But seriously why does everyone love Stefan so darn much? I’d take Damon any day of the week. Hands down, blindfolded, and hogtied. Sorry, got carried away.

Kudos to Stefan and Elena who stage a con of their own pretending to argue over Katherine, with both Caroline and Damon listening in. But it’s all a charade to discover Katherine’s real motive for being back in Mystic Falls. Nice work, Stelena!

That’s all for now folks. The Vampire Diaries airs on Thursdays on the CW at 8pm.