The Vampire Diaries were a pleasant surprise this week, especially with the return of Jeremy! Yay! But Jeremy’s 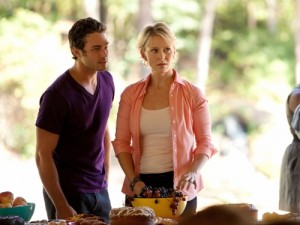 return notwithstanding, Kill or Be Killed was absolutely full of excitement and unexpected goodness. First of all Caroline really steps it up, standing up for herself despite Katherine’s influence and protecting her friends at the terrifying risk of revealing her new identity to her mother…which she does in grand style. In my opinion, she was the center of attention in this episode even with all of the wolf action. Secondly Mason (my sexy hot wolfboy) decided to mess with the Salvatore brothers in a big way…by exposing them and scheming to kill them. Let’s just say, I wanted to pulverize him myself, smoking hotness aside. But away from the rage and on to the recap.

In the beginning of the episode, I thought it was cool to see Caroline interact with her mother especially as she is now a vampire. I actually felt a little nervous. After all, what’s her mother going to say if Caroline acts up? “Go to your room this instant young lady!” Um, I don’t think so. Love Caroline’s warning to her mother when she wants them both to hang out.

Caroline: Be warned. I’m in a mood.

Liz: Goodie for me.

Stefan also steps it up in this episode, taking control of Damon’s last little interaction with Mason Lockwood…you know, the whole feud re-ignited business, and trying to diffuse it. It was cool that he has Damon’s back without question especially when Mason overtly threatens Damon. That’s the one thing I like about Stefan (even with all the broodiness), is the fact that he is always looking out for his brother despite everything that Damon has done/said over time. That said, Stefan doesn’t take it easy on Damon when Mason reluctantly agrees to back off, and even gets a little snippy.

Stefan to Damon: I think first chance Mason Lockwood has he’s going to drive a stake through your heart, and then through mine. All because you took it upon yourself to try to kill him. So thank you. Like we don’t have enough problems.

I liked the whole dynamic between Tyler and Jeremy, but I thought it was a little weird that Tyler would confide in Jeremy about the moonstone. I mean it’s not like they are great friends or anything. But I guess the writers needed someone else other than Mason and Tyler to know about its existence. The little joke with one of the girls pretending to break her neck tumbling down the stairs actually got me, but that would have been way too predictable. My guess is that at some point down the track, Tyler will kill Jeremy, who of course will be wearing his ring, and he will come back to life, but no doubt the curse will still somehow be triggered.

I totally did not expect the vervaine in the lemonade when Damon started choking. That was awesome! And then of course the whole set up with Mason where both Stefan and Damon get shot down by Sheriff Liz Forbes and her deputies, with wooden bullets no less! I have to admit, I had a little heart palpitation moment when they got shot. Wow, I expected an ambush but not a straight-up shoot-out. Very unexpected.

After they take them into the Lockwood crypt, my girl of the evening shows up in rare form tracking 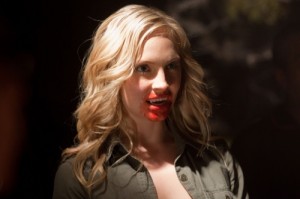 the brothers with her super souped-up senses. She and Elena come face to face with Mason, who of course knows exactly what she is. Expect he can smell it even in human form. Kudos to her though, she completely schools him like nobody’s business when he gets Elena in a headlock.

Caroline to Mason: I can take you.

Caroline: Yeah. (Flies toward him and tosses him up against a tree). Told you.

After that sweet piece of ass-whopping, she follows Elena into the crypt, takes out the deputies, and emerges from the shadows with a meek “Hi mom” to Liz who just stares at her in complete horror. Super vamp killer turned apologetic school girl. Classic. Great scene although I do have to say that Caroline’s blood goatee was just a wee bit off-putting.

Moving on to my next love, Damon, who despite almost being killed at Liz’s gunpoint, says very sweetly to Liz, “you’re my friend.” Awww. Then of course, I do have to mention

his compassion toward Caroline when Liz was saying that she was no longer her daughter. I love those moments when Damon’s a softie…they’re few and far between but I do love them.

Liz: She’s not my daughter. My daughter’s gone.

Damon: You have no idea how wrong you are.

It was cool that Elena thanks him, because deep down she knows that he does care. She is still smart enough though to not have any illusions about his motives, which at the core, are probably not in the least bit selfless.

And now finally on to the couple of the day, the one and only Stelena. Thought it was a nice moment when Elena offers to help Stefan try to control the effect of drinking human blood by weaning himself onto it a little at a time, by giving him a taste of her own blood. It was a very poignant moment followed by a very sweet (if metallic and blood-tinged) kiss.

Lastly, for the final surprise of the episode, I definitely did not call the whole Mason and Katherine thing. That was a huge unexpected twist. That girl certainly gets around, that’s for sure! And well, if we’re comparing the wonder twins, then I would be remiss if I didn’t comment on the sweet mildness of Elena’s kiss versus the um, more passionate embrace of Katherine. But I guess she does have a few hundred years on Elena, teen vamp machine that she is.

Overall, loved this episode! Started slow but once it got going, it didn’t stop. The Vampire Diaries airs on Thursdays on the CW at 8pm.

3 Comments on The Vampire Diaries: Kill or Be Killed