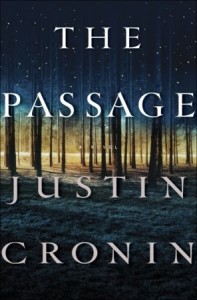 The Passage by Justin Cronin got a lot of hype, most notably from the frenzy in 2007 between film studios caught in a bidding war for a half-unseen unfinished manuscript, which eventually sold for a staggering $1.75 million dollars. Yep, you read that right, just under a couple million. That isn’t even considering what Mr. Cronin got from Ballantine Books for the rights to the trilogy – reportedly a whopping $3.75 million or thereabouts. Sounds like overkill? A bit, especially when you consider that Mr. Cronin’s story is really nothing new. There’s nothing original about vampirism caused from a vampire bat virus, and when you add in a heap of post-apocalyptic survival drama after the vampire apocalypse, strongly reminiscent of Resident Evil and I Am Legend, it’s not like you’ve got something fresh enough to be worth squillions of dollars. Or do you?

The Passage is story about a set of military experiments gone awry – ones intended to make a stronger, more invulnerable soldier by infecting the soldiers with a “vampire” regenerative-type virus. The initial test subjects, not including one survivor of a South American expedition bitten by vampire bats (the origin of the virus), are twelve death-row inmates who are injected with the virus and monitored in an underground facility in Colorado. The fourteenth subject is a little girl called Amy who seems to have strange abilities and who becomes a central figure in the story. Predictably, the twelve called the Virals, get out and infect the world, mind-controlling most of the infected like mini-vampire cults. Enter the vampire apocalypse, and an unexpected complete 180 degree flip in the story where everyone dies and we are transported 100 years into the future with all new characters trying to survive in a whole new vampire-infested world. Amy returns to lead these survivors in a fight against the Virals and the search for others like themselves.

The Passage is a long book – 784 pages to be exact, but I managed to read it in one day until the wee hours of the morning. It wasn’t that the book was a page-turner for me as much as Harry Potter was or even the later door-stops in the Twilight series, but I just wanted to finish it. Mr. Cronin is a talented writer and does a great job in spinning a believable and well-structured story, with strong character development especially in the beginning. Unfortunately, what made me lose interest and undermined these great elements (and why many people have said that they just stopped reading halfway), was the jump almost a century into the future, complete with all new characters living in a whole new world. It was quite jarring, and not in a good way. I was emotionally invested in the characters developed during the first few hundred pages so I immediately felt disconnected and disoriented. Nonetheless, I pushed through and continued to read, albeit far less interested than I had been, only because I wanted to finish the story and see if there’d be any full-circle plot twists or any relation to the beginning at all. But from that point, everything just seemed to fall flat for me. I wasn’t interested in any of the new characters, not even Lish, who normally would have been my kind of girl. I attribute this to the extremely abrupt transition from the first part of the book to the next…I don’t know how any author can expect to build-up a reader’s investment into his characters only to rip them away and introduce more characters that seem far two-dimensional in comparison to the ones he just took away! I didn’t care about any of the new characters, far less any of the budding relationships between them. The book became a little more interesting upon the return of Amy (the half-vampire, half-human hybrid), who leads the new characters to victory over one of the more powerful Virals (go Team Babcock!) But by that point, all I wanted to do was to finish it, more or less with the enthusiasm of eating a meal for the sake of eating it rather than for taste or enjoyment.

I love vampire fiction, because I like actual stories about vampires. However, the vampires in this story weren’t characters at all – they were more of a catalyst to this post-apocalyptic tale rather than anything else. That said, I will read any kind of vampire fiction, even the ones like this book which are more sci-fi than supernatural or fantasy, along the lines of The Strain. The plot is simple and is more or less a mash-up of other already-written books (The Stand, The Road) and already-made movies (Resident Evil, I Am Legend, The Village), and while the writing is excellent, the pacing particularly during the latter half is far too slow with too much repetition and superfluous detail that just seems to bog down the action and undermine the flow of the story.

Lastly, while Amy was a central figure who kept me interested, I didn’t think that she was exploited as much as she could have been. It would have been really cool to see more of her abilities (why did the animals react to her in the zoo even before she was infected) or to understand how she interacted with the infected (attracting them and/or calming them down) and to know more of why the Virals were so afraid of her. Outside of the slow pacing issues, she really could have saved the book for me if she’d been leveraged better – helping with both the transition between the first part of the book to the second, and also to connect me with the new characters, including the infected and the Virals. In a sense, I found myself waiting page after page to see Amy DO something based on what I learned of her earlier on in the book, and it just never happened. That was a big disappointment, but maybe Mr. Cronin is saving her for the other two books (if you’re familiar with any of my other reviews, you’d know exactly what I think about “cliff-hanger” non-standalone books).

Overall, I would rate The Passage 3 and a half out of 5 stars. Great beginning, disappointing middle, and somewhat mildly redeemed end.