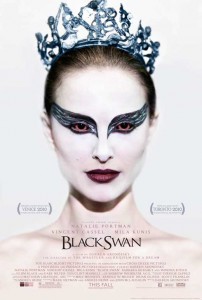 Black Swan was irreverent and disturbing and absolutely brilliant. It’s been a while since I’ve seen a film that had me squirming in my seat in discomfort, a film that is so raw yet so beautiful that it’s haunting, and one that leaves you trying to piece together what you’ve seen for some sort of meaning even as it continues to elude you. Natalie Portman was amazing as Nina, a tortured ballerina tormented by her own inner demons in her search for perfection. Already broken and barely held together at the seams by a life of complete rigidity, Black Swan is an event…a journey that completely throws her carefully orchestrated life into violent upheaval, and splinters every part of her into a million unrecognizable pieces. 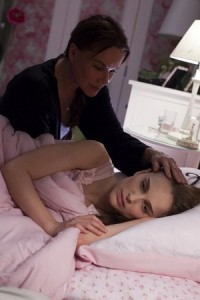 Black Swan is the story of a ballerina, Nina Sayers (Natalie Portman), whose life begins and ends with ballet. She lives with her mother, a dancer herself, who gave up dancing for her daughter. Their relationship is passive/aggressive, rigid and controlled, much like everything else in Nina’s life. After the retirement of the company’s prima ballerina (Winona Ryder), Nina auditions for the role of the Swan Queen in Swan Lake. The Swan Queen must play both the white swan and the black swan. As the white swan, Nina is perfection, every move sweetly exquisite and pure, but she lacks the passion and the darkness required for the dance of the black swan. Despite his reticence, the ballet director, Thomas (Vincent Cassel), casts her in the role as the swan queen after witnessing a fleeting spark of fire from Nina. He encourages her to reach into the darkness within her and to release some of her iron-clad control, which is easier said than done. But darkness is already in Nina’s past, as is evident from the self-inflicted wounds on her back. Desperate to be perfect, reality starts to blur as Nina spends more time dancing the role, and 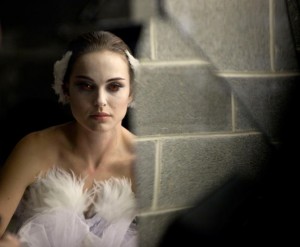 making the emotional and mental transformation into the Swan Queen. Her rival at the company, Lily (Mila Kunis), who personifies the black swan, is passionate and seductive and fiery. Nina enters into a violent part-real, part-imaginary relationship with Lily, one that eventually provokes and releases the black swan inside of her. Her hallucinations grow more violent with Lily blurring into visions of her own face, and she finds herself stabbing Lily during her debut performance of Swan Lake. In the end, Nina dances a show-stopping performance, but realizes during the last dance that she hasn’t killed Lily, she has stabbed herself. Like the Swan Queen, she dies, but her performance is true perfection.

Holy cow. I just wrote that and I’m still blown away by this film. Everything…the acting, the story, the cinematography, and the music…was spectacular. It was completely mind-blowing. Even the colors and the setting were perfect complements to everything going on inside of Nina…black and white, good and evil, dark and light. Black Swan is a 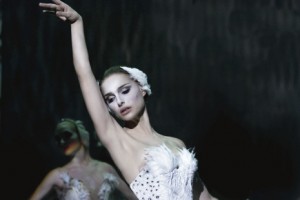 film about obsession, and perfection. It’s a battle of opposites – innocence versus depravity, fragility versus despotism, beauty versus revulsion, child versus adult, and how these opposites exist in tandem within, separating and coming together depending on event and circumstance. Black Swan exemplifies Nina’s journey to release the darkness inside of her, and while her alternate Lily seems to embody the black swan, she is merely a foil to underscore Nina’s own raw transformation and her descent into a 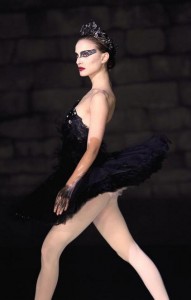 psychological tornado. Still, in search of perfection, and while seemingly lost, Nina in one sense to me does seem to be in absolute control of what she wants. Despite her “insanity”, she willingly enters into madness to be the black swan, and while admittedly, she is terrified, she still purposefully murders the white swan (innocence) inside of her. That in itself, is mind-boggling.

Black Swan is beautiful and terrifying at the same time, and you feel so connected to Nina, that it’s difficult to remain uninvolved. Her pain becomes your pain, her fears and hallucinations, yours. Flawed from the beginning, her psychological and emotional degradation is consuming. It is truly intense. Black Swan will leave you tied in knots, and it will take on a journey where you will have a hard time deciphering what is real and what is not. Good and evil will become indistinguishable, as will passion and obsession. A thrilling and chilling visceral experience, it’s one of the best films of 2010. I would rate Black Swan five out of five stars.