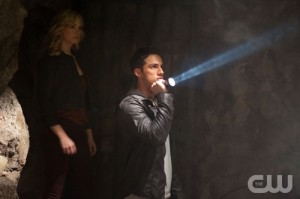 Totally awesome Vampire Diaries episode! I absolutely loved all parts Tyler in this episode, especially when he was changing into the werewolf. Thought that was amazing, and the special effects were just enough to be cool and not overdone. The CW did a great job of showing just enough of the human to wolf transformation (like the bone-breaking reversal of the hind-legs) without showing too much to make it seem unrealistic. I loved how they did the majority of it in the shadows, with glimpses of his twisting bones, sharp teeth, and yellow eyes. I especially loved the dynamic between Caroline and Tyler, and how she didn’t leave him even when he was getting to the point of no return. Thought it was raw and hot…love, love, loved it! But I’m getting ahead of myself.

The episode opens with Elena being locked inside her own home from one of Bonnie’s spells so that she can’t get out and stupidly sacrifice herself to Klaus. The invisible door thing was pretty cool, and of course, Damon as always was on hand to add insult to injury. 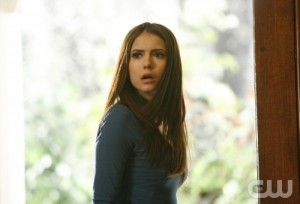 Damon to Elena about Stefan: A, he can’t do anything about it, and B, what I just said. […] You should get out enjoy the sun. Oh wait, you can’t.

Moving on to the new vampire hotness, I’m still not sure on what Elijah wants, but at least we know now that he is against Klaus and wants to draw him out so that he can kill him. He makes a deal with Elena for her to stay put and not put herself in Klaus’ way, so that Elijah can set everything up when the time is right. I still think that he is a good baddie, but I am not entirely sure what his end-game is.

The twist with Jules, the new werewolf, was neat. I loved the interaction with Damon and Alaric in the bar. Although, I do have to admit that it’s a little strange to me that a vampire with all his super-senses wouldn’t be able to sniff out a werewolf. Seems odd. Plus, I didn’t like that she was playing him, even though his parting one-liner was very typical-Damon funny. 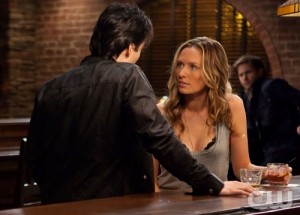 Jules to Damon: You’ve been marked.

Damon (after Jules leaves) to Alaric: You’ve been marked? What the hell kind of wolf throw-down crap is that??

Jokes aside, Jules wasn’t kidding – she shows up at Damon’s house in wolf-form and attacks him. But Rose throws herself in front of Damon and sustains a bite even as Damon wounds Jules. She takes off. Strangely, the bite heals which neither of them seem to expect, as the bite of a werewolf is supposed to be fatal to a vampire. Alas, they discover later on that it is indeed fatal when the bite starts to fester on Rose’s shoulder.

While all of this is going on, our favorite witch Bonnie is working a deal of her own, only with Luca this time, to destroy the moonstone. But Luca tricks her and steals the moonstone for his father. It’s all very mysterious, but of course Luca’s father is in league with Elijah, so who knows what they intend to do with the moonstone. I do have to say though that the whole set-up and the spell to get rid of the moonstone was quite romantic with the magic and all the candles. Poor Bonnie, she’s going to have a rude awakening. Stupid warlocks!

Meanwhile, Elena agrees to Elijah’s deal, but demands that Stefan be freed from the tomb in return. It was a cool moment when Elijah shows up and Katherine looked 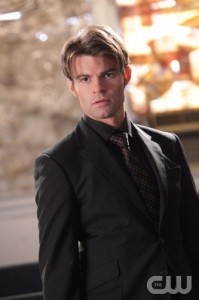 physically sick – she knows just how strong Elijah is, and of course believes that he is working with Klaus. Elijah gets Luca’s father to lift the tomb curse (which also gives an idea of his magical strength because Bonnie couldn’t do it on her own), and he releases Stefan. Love when Katherine tries to escape and Elijah blocks her way, compelling her to stay put and telling her that when Klaus arrives he will want to know exactly where she is.

I do have to say that I’m loving the all-powerful Elijah – he is a lot hotter than he was when he first appeared on the Vampire Diaries! I can’t wait to see what happens when he takes on Klaus because I know it’s going to be good. Considering that Klaus is technically the oldest and most powerful vampire, Damon and Stefan will need all the help they can get to protect Elena, and that’s where my new boyfriend, Elijah comes in. Like I said, can’t wait!

The Vampire Diaries returns in January, 2011.