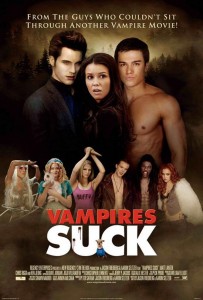 Ok, now I know I’m probably going to get beaten for reviewing this movie…but hey, it’s about vampires and it’s the hot kid from 90210! So give me a break, ok?

Anyway, I’m a dubious fan of spoof movies because I don’t find them that funny even though I find myself getting sucked in and watching them and then being all angry for having wasted ninety minutes of my life (Meet the Spartans, anyone?) I held off from watching Vampires Suck until just this past weekend. Given that I’m gearing up to read The Passage by Justin Cronin, I figured that some serious vampire laugh therapy was needed. That said, apart from some minor eye-rolling, I did get a couple laughs even if it only got rated at a pretty terrible single-digit 4% on the Rotten Tomatoes tomatometer.

Basically Vampires Suck is a spoof of the first two Twilight movies. In the tiny town of vampireville Sporks, Becca, a misunderstood, angst-ridden teenager, is torn between two boys – the segway-riding vampire and the cat-hunting werewolf. Everything from then on goes toe-to-toe with the scripts from Twilight and New Moon, and then it all comes to a head at the prom when Becca gets her wish to be with Edward forever. Go Team Edward!

Yeah, you read those three lines right. That’s it. That’s the summary. It’s pretty much exactly what happened. Other than the segway and the werewolf “Raining Men” dance (which were both shown in the previews), there wasn’t a ton of laughs to be had. The best part about this movie was Jenn Proske, whose impersonation of Kristen Stewart literally had me in tears every time she opened her mouth. She could have been her doppelganger. I also liked that Jacob kept running off after random cats, but that was only because I love the dogs in Up who scream “squirrel” and lose all concentration. But sadly, that was pretty much it.

Overall, as far as spoofs go, this one barely rated, and belongs in the pile where Disaster Movie and Epic Movie ended up. My recommendation? Only watch it if it’s 1) free and 2) you get something inexplicably rewarding out of seeing Twilight made fun of (this means you, you Twi-haters). I’d rate Vampires Suck half a star, just for Matt Lanter’s sparkly hot bod.