Hello twists and turns of the Vampire Diaries! Could it be…is it possible…is Elijah fighting the good fight? Is he secretly against the ominous Klaus? I ask these questions because I found it very strange that he didn’t kill Damon or take Elena, and then he tells his warlock buddy that she needs to stay where she is because she’s “safe.” Very interesting, no? I mean I could totally be imagining things and he could still of course be the big bad and “saving” Elena for when Klaus arrives. But seriously, what would be the fun in that? Evil vampire, rah rah rah. Been there, done that. We need a new blood-sucking good-guy!

Overall, pretty good episode this week. Moving on from a couple weeks ago, the plan to get the moonstone is in full swing with the help of Bonnie who tells the Salvatore brothers that she can create a spell to immobilize Katherine for a minute or two while the tomb spell is removed so that they can get in and out to get the moonstone. Sounds good in theory, right? Well, obviously Jeremy thinks so because he sneaks some of the spell dust, goes into the tomb, throws it on Katherine, and 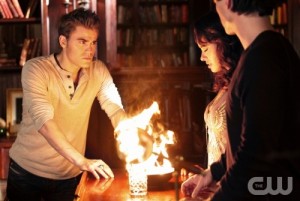 finds the moonstone. Only, he didn’t really hear that it was “a minute or two.” More like a minute, buddy. So of course, after finding the moonstone, he is faced with a snarling and very P.O’d Katherine. Ever the quick-thinking little brother, he tosses the moonstone beyond the tomb spell’s entrance just as Katherine takes a chunk out of his neck. Stefan shows up, and sacrifices himself to save Jeremy by entering the tomb (where he can’t get out) and throwing Jeremy out.

Meanwhile, Elena has her own plan to sacrifice herself to Klaus to save her family and friends, and with Rose’s help, they get a lot of information about Klaus from the dead Slater’s girlfriend, who also contacts Klaus’ minions at Elena’s request. Rose calls in Damon, once she realizes that Elena intends to sacrifice herself. But Damon can’t do anything and while he’s contemplating throwing Elena over his shoulder and carting her out of there, Klaus’ minions show up. But surprise, surprise, so does Elijah who takes them out in grand style…by ripping their dead hearts clean out of their chests. Rose runs away, terrified, but Elijah just leaves without harming either 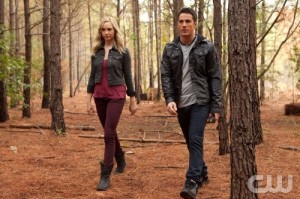 To round out the episode, Tyler also gets a glimpse of what Mason went through during the first full moon change and it’s not pretty. Caroline tries to be there for him, but Tyler is still wary of all her help. It was very sweet when she tells him that she doesn’t want him to be alone because she was alone when she turned. Still think those two are going to get it on at some point.

Pretty cool episode, all that said. Next week’s episode looks pretty racy, with Stefan and Katherine stuck in the tomb together, and all the snippets of black underwear. Stefan’s indiscretions aside, I can’t wait to see what they do with Klaus, and of course, my boy, Elijah. I am betting all on the evil good. No way he’s a baddie, even with Luca’s freaky cat-burglar daddy being his righthand man.

The Vampire Diaries airs on Thursdays on the CW.