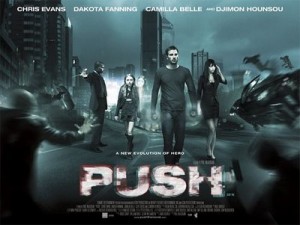 Finally got around to seeing Push the other day. I initially wanted to see it in the theaters but didn’t think it would be worth the $11, especially after seeing all the negative reviews. Despite a dismal 23% on the Rotten Tomatoes tomatometer, Push still had an audience average rating of 47%, which means that most lay-people, like myself, didn’t think it was all that bad. Definitely better than Surrogates (which I know is unrelated except for the sci-fi connection but I’d probably lump these two in the same general area – cool concepts, iffy execution in film) Still, as you know from my review of Surrogates, I wasn’t a fan.

So basically, this flick is about a group of “special” people who have super-powers like telekinesis, telepathy, the ability to smell, the ability to hide people or things, and the ability to manipulate objects into different forms, sort of a similar concept to X-Men, and the television series, Heroes. These people, 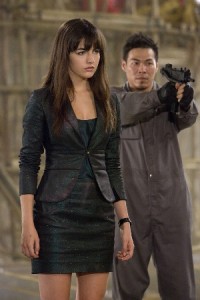 characterized as pushers, sniffers, shifters, bleeders, wipers, movers, and watchers are on the run from a government agency  known as Division that is experimenting on them with a vaccine designed to boost their abilities for Division’s own end. There’s only one problem – no one’s been able to survive the vaccine. Until now…until one very special pusher, Kira (Camilla Belle), who somehow manages to escape them AND steal the vaccine. A watcher, Cassie (Dakota Fanning) and a mover, Nick (Chris Evans) team up to look for her because she’s the secret weapon to winning the war against Division. With the help of some other renegades, they confront Division while facing off against another band of superhero outlaws (the Hong Kong super-mafia equivalent) who want to use the vaccine themselves.

The film twists in and out against the hustling and bustling backdrop of Hong Kong, which adds its own unique intensity to the already convoluted dynamic 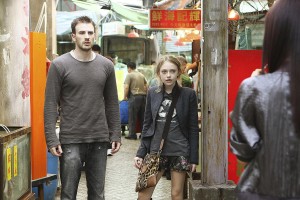 of all the different superheroes/villains. The action sequences are pretty cool, especially the one where Chris Evans comes up against Division’s mover in a Chinese restaurant, and the end scene where Camilla Belle is puppeteering an entire army of people with her mind. In terms of acting, Dakota Fanning stole the show in my opinion, with Chris Evans as a great foil for their brother/sister repartee. I really enjoyed the dynamic between them.

On the flip side, what undermined Push completely was the overdone plot. There were just too many elements all over the place surrounding the core story that just made it painful to watch at times…and LOOOOONG. The execution of some of these elements and twists upon twists, like Dakota Fanning’s constant image of her own death or the Hong Kong mafia villains became annoying, and only contributed to slowing down the pace of the film. I think the film would have been better off focusing on the main story instead of getting caught up in the various back-stories of all the peripheral characters. In the end, that just ended up creating more holes than it closed, and lost credibility for me which is a pity, because I think it had a ton of potential. It could have been executed so much better especially since it was full of some really neat ideas – like bleeders (exploding ear drums, people!) 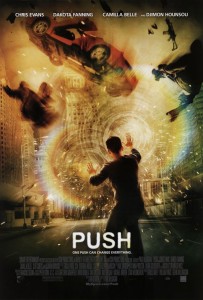 That said overall, despite some glaring flaws, I actually enjoyed about 60% of this film. I thought it was cool despite some already “done” psychic abilities, and it had enough originality to keep me interested. I enjoyed the main characters, and thought that the larger plot came together pretty decently in the end – i.e., somehow they manage to beat Division and the mafia outlaws, and I liked the whole “red envelope” thing, especially the last one that Kira opens.

I would probably rate Push two out of five stars. Would I buy the DVD? Probably not. Would I watch a sequel if there is one? Probably yes (on DVD or cable though). In my book, superheroes, even corny ones, are cool – check out my review on Megamind if you don’t believe me. I’m a sucker for them. Anyway, if you’re a fan of the superhero genre, you will probably enjoy this movie or at the very least some of the concepts. But um, don’t quote me on that.