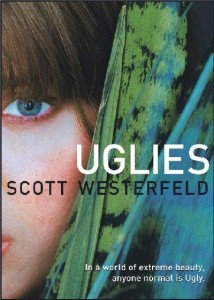 Finally had a chance to read Uglies by Scott Westerfeld after my thirteen year old neighbor recommended it to me several months ago. It was a quick read, a few hours at the most. Overall I enjoyed it, especially the bits about the hoverboard since I am an avid surfer. That was definitely cool.

The story is based in a futuristic world where everyone becomes “pretty” when they turn sixteen. They undergo a type of surgical operation (like plastic surgery) and are made super-model beautiful. However, what they don’t know is that they are also changed in the way that they behave and think. They are changed outside and inside. Tally Youngblood discovers this when she is forced by Special Circumstances (another kind of cruel pretty) to unearth a hidden band of rebels known as the Smokies who have run away and refused to turn pretty. Two of the leaders of the Smokies know a terrible secret – one that can unhinge everything that the pretty world is based on. The operation changes the way that you think and creates lesions on the brain like a cancer. So basically, being pretty is like being infected. It’s a very cool concept.

So cool story, and cool elements within the story like the hoverboards, bungee-jackets, and the Specials. Scott Westerfeld is also an awesome sci-fi writer so you know it’s going to be interesting and have a ton of excitement. This book was a page turner for me, and the final scene at the end was pretty cool – the daring escape and rescue although I did feel a sense of confusion to learn that David’s father was dead.

Overall, I would give Uglies 4 out of 5 stars. Great concept with solid writing and language. Teens will love because it’s something different.