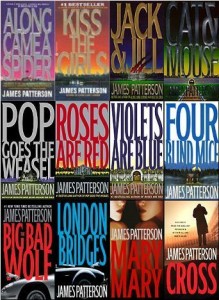 So I am flying to Switzerland and open up the Delta Sky magazine, and what do I see? You got it (or at least you should have from the title of this post). Yes, yet another article on the unstoppable James Patterson. I wrote a post about him a while back after I read MAX – A Maximum Ride Novel (his Young Adult bird-themed novel), and following the article in the NY Times Magazine.

James Patterson is the largest selling author in the world, having sold 170 million copies of 65 books. The article aptly said that the “record-breaking statistics have piled up faster than the dead bodies in his tautly written crime thrillers.” He has had 54 New York Times bestsellers, more than any other writer, and 37 of them were number 1 on the list. Sales of his books have reportedly generated over $500 million for his publisher, Little, Brown & Co.

What more can I say? The man is a machine. I suspect that part of his secret is that he treats writing like a business – from engineering the product (in some cases taking on co-authors for his projects) to marketing and selling it. The NY Times Magazine article estimates that James Patterson sells one out of every seventeen books sold in the United States. Now there’s a staggering number, 1 out of every 17!

Would that we were all so lucky (or savvy).