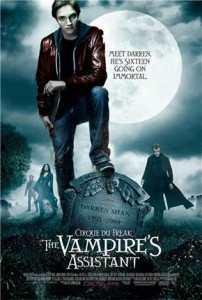 Boy am I glad I didn’t go to see this movie in the theater! Cirque du Freak: The Vampire’s Assistant was just not good. Sure, it had a few redeeming moments like some of the vampire special effects and a surprisingly decent cast (John C. Reilly, Salma Hayek,  Ken Watanabe, and Willem Dafoe), but overall it just fell flat for me. It wasn’t a comedy, it wasn’t a horror, and even though it had a smidgen of romance, I wouldn’t quite call it a romance either. It felt like a giant floundering mess that well…sucked, and not in a good way. Rated at 37% on the Rotten Tomatoes tomatometer, The Vampire’s Assistant would be rated even lower in my book, maybe somewhere around 17%, if only for its freak factor.

To recap, two best friends, Darren and Steve, sneak off to see the visiting Cirque du Freak with its very special line-up of freaks, the least of whom are a vampire, a snake-boy, a 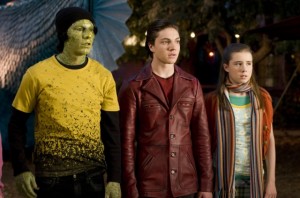 bearded lady, a monkey chick, and a bunch of some Gollum-looking little creatures reminiscent of the Dinks from Spaceballs. One boy has an affinity for vampires, the other spiders. One boy is perfect, the other not so much. Good versus evil set-up? You betcha. But I’m getting ahead of myself. Darren, the spider-loving boy decides to steal a mesmerizing and beautiful spider from the show, only to have it fatally bite his best friend, Steve. To save Steve from certain death, Darren makes a deal with the head of the freak show to become his vampire assistant or a half-vampire. In a very weird manipulation of events by Mr. Tiny (the obscure and 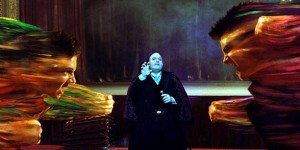 overly flamboyant fat bald dude who is supposed to be the epitome of evil), Steve and Darren find themselves pitted against the other, Darren the half-vampire versus Steve the evil vampanese (aka the bad vampires)…which by the way, doesn’t even get resolved. See inset, where they are frozen by Mr. Tiny and the fight is postponed for another time. Ahem, enter the sequel(s) at some point (please…say it isn’t so!)

The movie did have some good moments and funny one-liners which allowed me to get through it without turning the television off so at least that’s a good thing.

Crepsley to the audience: Thank you ladies and gentlemen. I am so excited to be here in an anonymous small town that used to have character but is now just a bland suburb filled with chain stores and surrounded by slum. It really is a pleasure to be here. And I am SO honored that blah blah blah and so on and so forth and etcetera ad nauseum. 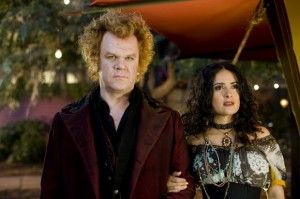 exciting part, although not a defining moment enough to salvage the whole film. The acting by the lead high-schoolers left me cold, and completely undermined some of the better acting by the more seasoned cast members like Salma Hayek and John C. Reilly, who were both pretty awesome. This film could have been a lot better than it was, which is disappointing since there seem to be so many fans of the book series.  In the end, The Vampire’s Assistant just didn’t have any fangs whatsoever and offers very little bang for the bite. Instead it turns out to be a bloodless blahness that is embodied by the film’s final somewhat clichéd and unoriginal message – “it’s not about what you are, it’s about who you are.” Um, gag.

I would rate Cirque du Freak: The Vampire’s Assistant 1 and a half out of 5 stars. Just for the record, the half-a-star is for Octa, the blue and red spider that made me giddy with delight and throw up in my mouth at the same time.

Look at the little furball…she’s so freakin’ cute! *shudder*