Well, well, well. There’s a new baby-vamp running around Mystic Falls, and it’s our favorite happy-go-lucky blonde who never seems to get anything but the short stick and Elena’s leftovers. But now, things are a-changin’!

Caroline is officially undead as we saw when she was enjoying her Type O Negative koolaid baggie while still in the hospital. Initially I didn’t think that I would like Caroline being a vampire but after seeing this episode, I think she will be awesome. There’s an inner badass in there that’s just begging to come out…no more Miss Nice Girl. Well only when the fangs are out, I mean.

I thought the opening of the episode when she slowly realizes that she is a vampire was awesome – especially the bit with the sunlight, and then the eyes and the teeth. That was very cool. It was interesting to see her transformation because in the past on the Vampire Diaries, it’s usually all about staking the newborn vampires as soon as possible, like Vicki. You don’t get to see them experiencing it step-by-step, especially when it’s someone as unique and quirky as Caroline. I loved the compulsion with the nurse when she realizes her mind-control power and that she could make the nurse forget what she’d done.

Caroline: You can’t tell anyone! [Nurse nods.] I don’t know how that works, but it’s brilliant.

The neck-biting was a wee bit overdone but I guess she is a newborn after all and can’t control herself or her hunger. Loved how she put Damon in his place when she saw him in the hallway at the school carnival. I didn’t expect her to be able to toss him on his behind, especially since Damon is technically her maker and older than she is, but I guess that is newborn strength for you.

Speaking of Damon, thought he was a little tame overall in this episode. Still, I was glad to see that he still had at least a couple of his Damonisms going for him.

Caroline: What are you going to do?

Damon: The only thing I can do. I’m going to kill you.

Angry much? I did feel a little sorry for Damon in this episode. After all, he gets blamed for Caroline being a vampire when it wasn’t really his fault, Bonnie sets him on fire in a magical rage, and Elena leaves him burnt and battered on the ground without even looking back after she stops Bonnie. This, after he tries to do the right thing and kill an unpredictable newborn vampire on the loose (even if it is Caroline). Honestly, if I were Damon, I would be a jerk too. Then I wouldn’t have to care about anyone or whether anyone cared about me. I would be untouchable. It kind of gives you a little perspective into his nature, doesn’t it?

Loved the end of the episode when Caroline controls her hunger (and the eye thing) to be with Matt just like Stefan had taught her. That was a nice moment especially after Matt tells her that he was in love with her, which is what she’d always wanted (well before wanting blood more than anything else of course). I would have preferred if they’d ended on that note instead of the cheesy Stefan/Elena moment on the top of the ferris-wheel which felt too predictable and staged especially with his ominous ‘things are going to get worse‘ last words. Uh oh…broody doom-centric Stefan is baaaaack. Although in his defense, he did step up with Caroline to teach her vampire basics 101, so maybe he can brood just a little. A smidgen. 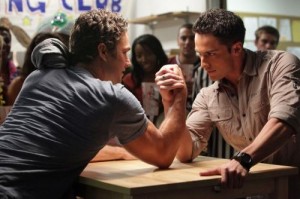 I was unsure about the whole werewolf theme, especially since that just aired on the last season of True Blood, but I thought the CW did a good job of introducing it with the glowing wolf eyes and the animal-like jumping. I also like that Tyler is smart enough to question the motives of Mason and why he wants his father’s moonstone. I was intrigued, so obviously that’s a good thing.

Next week’s previews look awesome with some more confrontational werewolf/vampire action! The Vampire Diaries airs on Thursdays at 8pm on the CW.