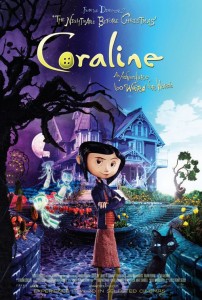 You know it’s going to be a creepy, mind-bending story the minute Coraline says “the dreams aren’t dangerous” to her mother. Um, yes they are, sweetie.

Coraline, directed by Henry Selick, is definitely not for young kids! With a very Tim Burton-esque feel and a macabre storyline, even I was freaked out at points. Henry Selick also directed The Nightmare Before Christmas which was written and produced by Tim Burton. Despite Tim Burton not having any involvement with this film, I still felt his vibe, probably because this type of animation and dark, creepy characters are so synonymous with his work. See my last post on The Tim Burton Exhibition at MoMA. 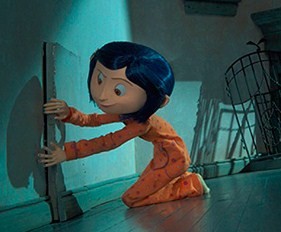 Brief synopsis: The story is about a girl called Coraline who is unhappy with her life, and feels bored and neglected by her parents. When Coraline discovers a mysterious door in her house, it leads to a mirror-image parallel world where everything is perfect. Perfect parents, perfect friends, perfect everything. The people in this world though,

all have button-eyes (yes, very disturbing) which hints that everything may not be as perfect as it seems. Sure enough, the “other” mother tries to get Coraline to stay there forever by sewing on her own button-eyes, in effect, giving up herself for the spiderish soul-sucking “other” mother to eat (yes, and it is exactly as it sounds – she eats children, very reminiscent of Hansel and Gretel). Coraline fights her off with the help of a magical cat that moves between both worlds, and frees the souls of three other children “eaten” by the other-mother as well as her parents. Escaping from the horrific parallel world, she throws the key in a bottomless well so that no one can ever reopen the door to the “other” world.

s, Coraline is a fantastic story. Coming from the mind of Neil Gaiman, you’d expect nothing less. Henry Selick did an excellent job in bringing it to life in a frighteningly magical way that had me cringing and wanting more at the same time. At times, the movie also reminded me of Pan’s Labyrinth – the same feeling of escaping to a magical, if strange and terrifying, world. Coraline herself is a bit annoying, snarky, and willful, but I found myself rooting for her at the end to use some of that precociousness to outsmart the “other” mother. She definitely grows on you.

The movie straddles several important themes, the biggest of which is that the grass is not always greener on the other side, a common “want” of most children and adults alike. You always

want what you don’t have but as most parents always warn, be careful what you wish for. Be grateful and appreciative for what you have because the alternative could be far worse. Coraline also portrays how courage and determination can overcome any odds, no matter how large.

Entertaining, terrifying, and gratifying, Coraline is unique and will entertain for years to come. I rate Coraline 4 out of 5 stars.