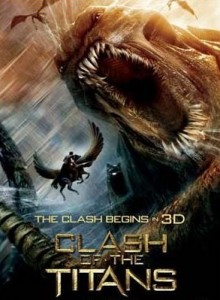 I am in love with Sam Worthington. And no, I am not biased because of Avatar. Well, not entirely. Still, he was not bad in Clash of the Titans as Perseus, a demi-god and son of Zeus (Liam Neeson) and executed some great action scenes reminiscent of Gerard Butler in 300 (ok, maybe just one move). Despite the low Rotten Tomatoes rating of a mere 30%, I did enjoy Clash of the Titans. Was I blown away? Not so much. Did I enjoy the film. Sure. If you’re looking for some supertastic remake of the original, you’re going to have to look elsewhere. This Clash isn’t it. And I saw it in regular-D, heard the 3D version was underwhelming.

Overall the film was good with some cool special effects and decent acting. Good

cast also including Ralph Fiennes as Hades, Mads Mikkelsen as Draco (Quantum of Solace and Casino Royale) and Alexa Davalos as Andromeda (Defiance and Chronicles of Riddick) as well as the all-grown-up boy from About a Boy that I forced myself to recognize because his face was stuck in my brain, Nicholas Hoult as Eusebios.

The story was pretty muc

h the same as the 1981 version on the film. The gods of Olympus have released the Kraken to wreak havoc on Argos because they are displeased with man’s overt defiance of them and their self-indulgence. When the Queen of Argos declares Andromeda to be more beautiful than a god, the gods are vengeful an

d release the Kraken upon Argos. Perseus, son of Zeus, is born to face Medusa the Gorgon and kill the Kraken before the princess of Argos, Andromeda, is sacrificed to it. With some decent special effects and a lot more CGI than the 1981 version, Perseus succeeds in his task.

All in all, not exactly blockbuster material but definitely good fun. I’d rate Clash of the Titans 3 out of 5 stars. And I’m still in love with Sam Worthington. So there.