Named after a medieval torture device with a two-pronged fork that was attached to a victim’s neck so they couldn’t sleep without intense pain, this episode Heretics Fork, was not bad.

Things are heating up with Val and Ryan and their half-human, half-V baby. The Vs are onto them and want to find them to dissect them. Apparently it hasn’t been possible to combine DNA so this baby is a threat to the V’s very existence. Ryan has decided to take Val somewhere safe, and Anna has decided to advance the live-aboard program as well as her plans for Tyler and Lisa. So far the best part is the deployment of the “soldier” – one of the mature eggs that Anna has created (yep, I wrote about the very gross egg pool in my last post, which surprise, surprise, she’s standing in again. It seriously grosses me out every time).

I do have to say that I definitely got a little of what I asked for – more alien/lizard special effects. Loved the V so 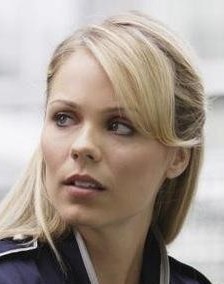 ldier eyes when it was tracking Ryan and Val. Imagine that Anna has laid thousands of those things!

I am starting to like Lisa a little. At first I thought she was playing Ty’s mom but maybe she does have real feelings for Tyler. Maybe that empathy that Joshua saw is starting to develop into something else!

Overall not a bad episode this week. Not too sure about Chad, whether he’s Anna’s little stooge or not. That remains to be seen. If he’s a half-way decent reporter, he should try to figure out both sides. We shall see.

V airs on Tuesdays on ABC at 10pm.