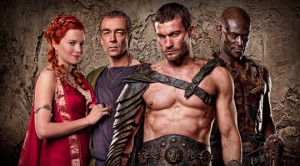 uld I not? I write a blog and I love Spartacus. I held out as long as I could to the very last episode of Season 1, when all I wanted to do was postsplode (post+explode=postsplode) the entire time. In the end, I had to give the shoutout to Spartacus: Blood and Sand, Season 1. Plus on IMDB, one of the listed genres is Fantasy. So there. 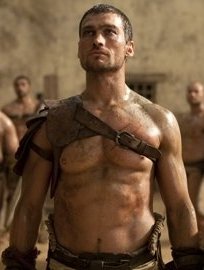 anyone’s looking in your window at your television. But once you get past that, you’ll be hooked. If you liked 300 and Gladiator, you will love this series. Put it this way, if you could merge those two movies, the end product would be Spartacus: Blood and Sand. Outside of the non-stop action, it’s not short on plot and intrigue, the two things that make this series addictive. I haven’t even gotten to the display of muscular bodies, a flesh-fest not just for girls but for boys too. It’s a complete visual (and sometimes full-frontal) overload so prepare yourself accordingly. Spartacus: Blood and Sand is not for the faint-hearted nor the easily-flustered.

A brief synopsis. Spartacus has been separated from his wife and forced into slavery as a gladiator by betraying a Roman Commanding Soldier, just because he wanted to protect his own people. As a gladiator in the House of Batiatus, Spartacus claims victory in the arena and be 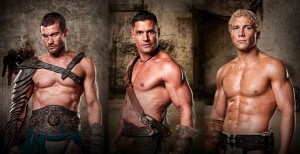 comes known as the Champion of Capua, the Slayer of Theocoles, and the Bringer of Rain. Batiatus sends for Spartacus’ wife as a reward but she is killed on the way by bandits. Spartacus is broken but vows to forget his past and move on. He is revered among slaves and brings the House of Batiatus to notice in Capua. Lucretia (Xena, warrior princess!), the wife of Batiatus, is having an affair with Crixus, the former Champion of Capua who is Spartacus’ sworn enemy. For a while, Spartacus is content with his lot but then he discovers that Batiatus is responsible for killing his wife. From that moment on, he is consumed with a need for vengeance against Batiatus, which he gets in the very last episode, “Kill Them All,” when the gladiators re-take their freedom and do indee 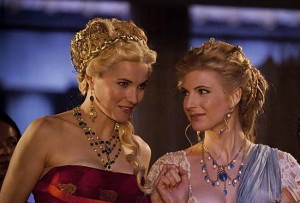 d kill them all.

What makes Spartacus: Blood and Sand so good, notwithstanding all the gratuitous nudity, profanity, and blood, without a single doubt is 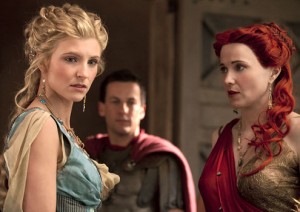 the plot. It actually has substance and is so full of unexpected twists and turns that you just don’t see coming. It is one thing if unpredictable. The acting was quite refreshing and the constant changing of affections and as I called it, intrigue, just kept me coming back for more.

Can’t wait to get Season 1 on DVD, and I’m waiting with fingers-crossed and bated-breath for Season 2.

Spartacus: Blood and Sand airs on Starz at 10pm on Fridays with an encore on Sundays.

2 Comments on Shoutout to Spartacus: Blood and Sand