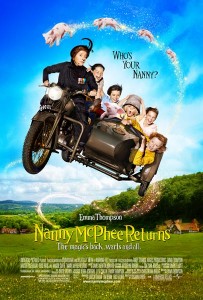 I’d really like to say that Nanny McPhee is back  and better than ever, but honestly I didn’t think that this sequel was as good as the first. Sure, there were a few poignant moments as well as some decent laugh-out-loud ones in Nanny McPhee Returns, but overall, it didn’t have much of the magic of the original Nanny McPhee.

Rated at 77% on the Rotten Tomatoes tomatometer, I honestly expected more given that the tomatometer is usually in line with what I think about most films. In this case however, I think it was a bit off. I’d probably put Nanny McPhee Returns at about 50%.

Nanny McPhee returns at Aggie’s behest (the baby from the first movie played by Maggie Smith) to help a young mother (played admirably by Maggie Gyllenhaal) with her three unruly children and their two spoiled cousins while their father is away at war. As usual, a scary-looking Nanny McPhee appears when she is needed but not wanted, and leaves when she is wanted but no longer needed (with hotness makeover complete). She has five lessons to teach these five youngsters, and goes about doing that in her unique stick-thumping manner. Although it’s a tad bit violent and reminiscent of a tween Fight Club when the children are beating the crap out of themselves, Nanny McPhee does manage to complete the first of her lessons. But then, toss in a creepy uncle who wants the children’s mother to sell the farm to save himself from debt (and the two heifers after his kidneys), an inanely random bomb diffusion, a weird blackbird addicted to putty, an unsightly (really unsightly) amount of poo, and a forged telegram that their father has been killed in action, and I’m not sure that the outcome can be anything amazing. Instead, it’s a hodge-podge of random events with a ton of fairy dust thrown on top of it to disguise its complete lack of anything magical.

That said, I didn’t leave the theater saying that this movie was terrible. It did have some redeeming moments too, like when the children stick up for each other, or their mother’s unswerving unconditional love (at moments when most mothers would go completely ballistic, like when they ruined her cherished wedding veil), or when their father comes home at the end because his son knows it “in his bones” that his father isn’t dead. Overall however, it just wasn’t near anything as good as its predecessor.

Emma Thompson is wonderful as Nanny McPhee, but the main storyline completely undermined how incredible she is in this role. I can certainly appreciate that this film is of course directed toward kids, but I just didn’t feel the magic. Don’t get me wrong, the actual magic was there – fairy-dust-making stick thumps, synchronized swimming piglets, sky-writing barley, and flying motorbikes, along with disappearing moles and unibrows. It just didn’t feel as original and extraordinary as the first film which also seemed to have more of a more fluid and emotionally-connective story. The magic went far deeper. The pacing of the film also felt odd to me, dragging along in parts and racing along in others which made it seem very fragmented and choppy. Things happened too much at random, and then didn’t get resolved or were ignored.

Nanny McPhee Returns does convey the right messages to children like not fighting, sharing, helping others, as well as more adult messages like taking leaps of faith, but it just didn’t come together for me as much as I wanted it to. I would rate Nanny McPhee Returns 2 out of 5 stars. Younger children will enjoy it, and as other reviewers have said, parents will probably enjoy their delight more than any of their own from watching the film themselves. I’d say wait for DVD.