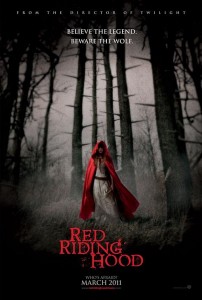 I went into Red Riding Hood with very little expectations, given the incredibly low rating on the Rotten Tomatoes tomatometer (a dismal 12% if you’re wondering). But I still wanted to see it because it’s about werewolves after all! I am also a huge fan of Amanda Seyfried. So despite the ratings, I still felt that the potential was definitely there…the potential for this to be a gripping retelling of the old fairy tale. However, in the end and as much as I’d hoped for it to be awesome, Red Riding Hood‘s biggest downfall was that it just tried to be too many things instead of focusing on one element and running with it. By that, I mean that it tried to cover all the genres – horror, romance, fantasy, mystery, drama – when it should have just picked one and stuck with it. It just seemed to get a little lost.

First, the pros. I thought that Amanda Seyfried was well-cast as Red Riding Hood with her cameo skin and her huge blue eyes, both of which convey a sense of purity and innocence associated with the girl from the fairy-tale. I also thought that most of cinematography, in terms of the color and setting, was just beautiful. The similarities to Twilight were obvious because of course, this film was directed by the same director, Catherine Hardwicke, whose eye for interesting movement and panoramic shots is well-known. I especially loved the scenes of Valerie’s red cape against the backdrop of the white snow! That was striking and gorgeous and metaphorical! Visually, I thought that the film was quite beautiful overall. I also liked the set-up that this was not in an urban scenario, it was in a village-type setting…which of course reminded me of The Village by M. Night Shyamalan. I definitely liked the feel of that from a story-telling perspective. I also enjoyed Gary Oldman’s role as the religious cardinal zealot who has demons of his own (he was a little over the top, but I didn’t mind it too much, because at least he gave the characters some life). And lastly, I didn’t guess who the bad guy was until the very last moment when it was revealed, so big and unexpected surprise which was great given the predictability of movies these days. I kept changing my mind as the film moved on and didn’t guess the wolf at all. In fact, when I realized who it was, it was a little creepy to me (I won’t ruin it for you but you’ll see why when you see it). 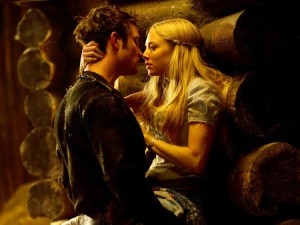 Now for the cons. I really didn’t like that the wolf was basically a big imitation Twilight wolf. I wanted something a little different, especially after the Twilight phenomenon (I’m still looking for werewolves along the Underworld lines) but with all the publicity about this movie being directed by the Twilight director, I guess I shouldn’t have been surprised. Even the triangle with the two boys is very similar to Edward and Jacob. In terms of action, I didn’t really think the boys were that bad. Henry reminded me of an awkward and endearing Ryan Philippe, and I thought that Peter held his own as the resident “bad-boy.” That said, they could have done with a little more character development, because I didn’t really get the chance to connect with either of them or become vested in them enough (even as far as to create “teams” like Team Henry or Team Peter). For me, it got to the point where it was only about Valerie and Father Solomon. The boys became peripherals.

Moving on, the wolf, most especially during the telepathy scene, was just abysmal, reminding me of the talking wolf in the The Neverending Story. We’re in 2010-2011, so my expectations of a werewolf communicating mentally with a human are much higher than it would have been say almost 20 years ago (take for example the difference between Tron versus Tron: Legacy – that’s what I’m after). Lastly, I thought the dream sequence with the “what big eyes you have, what big ears you have, what big teeth you have” was way too contrived. The whole feel of Little Red Riding Hood had already been achieved with the coloring, the setting, and the core of the story, but with those lines, it started moving into forced and fake territory. 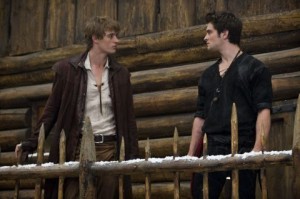 I didn’t mind the dance scene which many people seemed to have hated, but then, maybe that’s because it reminded me of the dance scenes in A Knight’s Tale, which added to the whole depth of that movie. Now that I think about that, I think that’s what this movie may have missed – the connection between something urban and modern with the old setting and medieval feel of the characters. I really liked the whole direction it was moving in, but ultimately, it just didn’t get there enough for me to sit back and fist pump. Add that to a lack of chemistry between the main characters (especially the love triangle), and you just don’t become heavily invested in them enough to be vested in the outcome of the movie itself. I would have liked a little more darkness, something to sink my teeth into. It felt too much like a light and airy fairy-tale as opposed to a dark and modern retelling that could have been sexy and awesome. I thought it should have pushed more limits (but maybe that’s why it’s rated PG-13). As a pet peeve, seriously, werewolves really shouldn’t be boxed into PG-13! I’m not even going to talk about the ending – what, do all werewolves look exactly the same? Come on! It would have done so much for this if the second werewolf had had some element of his human side.

Overall, although it had its moments, Red Riding Hood just didn’t get there for me. As I said, it had so much potential to suck you in, but it didn’t quite exploit all the things it could have to be really great. I would rate Red Riding Hood 2 and a half out of 5 stars, because it’s neither here nor there. I don’t think it’s terrible, and I don’t think it’s fantastic. Some elements were cool, and others weren’t. So it’s right smack dab in the middle for me. Teens and Twihards will probably like it for its romantic fantasy feel in the vein of Twilight.