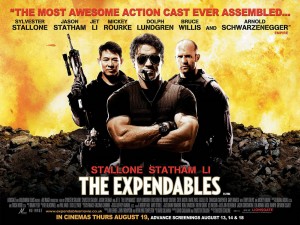 With a big cast of action heroes (Sylvester Stallone, Jason Statham, Jet Li, Eric Roberts, Terry Crews, Steve Austin, Bruce Willis, Mickey Rourke, Dolph Lundgren, including quite a funny cameo appearance from California governor, Arnold Schwarzenegger), The Expendables is cool and exciting. Unfortunately, there isn’t a lot of plot so after you get over the star swagger, you’re left hanging waiting for all the explosives and gun-firing and bad accents to dissipate with not much substance left over.

That said, is it exciting? You bet. With a ton of gun slinging action that pretty much never stops along with some crazy car chases and a ton of adrenaline-filled testosterone, the movie is on the go from the start. It’s an over-the-top extravaganza of manly machonistas. But outside of that, there’s no hiding the fact that the script sucks.

Rated 38% on the Rotten Tomatoes tomatometer, The Expendables is simply an aging A-list cast thrown together haphazardly in a B-grade movie, where a bunch of mercenaries attempt to save the destruction of small country under military occupancy and the control of an ex-FBI agent.  Plus, let me not forget the hot Spanish daughter of the army general who convinces Stallone to singlehandedly attempt to take on the bad guys. Save my people, Mr. Big Muscles.

Cheesy? Just a little. But I knew what I was getting into when I went to see this movie, so overall I wasn’t too disappointed. Instead, I just let myself enjoy the mad old-school action movie ride that was The Expendables and in the end, I’m not ashamed to say that I actually enjoyed it. Chock full of bullets and blood, there are some great one liners and unexpectedly quite a lot of comedy.

Trench (Schwarznegger): Give this job to my friend here. He loves playing in the jungle, right? 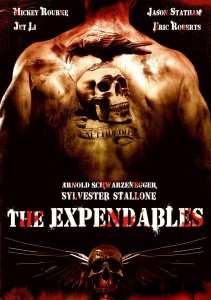 Barney: He wants to be president.

Hale (Terry Crews): Great, they got a small army. What have we got? (looks at Ying Yang) Four and a half men.

It’s by far not the best movie I’ve ever seen, but it’s not the worst either. If you’re into this kind of movie, I’d say check out The Losers which is way better (and funnier). The Expendables is definitely a “wait for DVD” movie but I’d rate it a 2 out of 5 stars just for its sheer old-school chutzpah.

Bring back the eighties!!! Um, no.