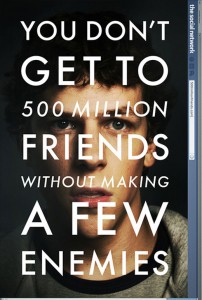 Considering that I am an avid user of Facebook, I really didn’t know much about this story other than the fact that its creator, Mark Zuckerberg, had some issues with other people at Harvard claiming he’d stolen their idea, and a bunch of suits and settlements ensued. In the simplest terms, basically that’s the gist of this film. The Social Network is the story of how Facebook was founded, how it got to 500 millions users, and all of the intrigue in between.

In summary, Mark Zuckerberg is a Harvard undergraduate and a programming genius. The movie opens with a date with his girlfriend, Emily Albright, where all he can talk about is getting into a Final Club (an exclusive Harvard club where one has to be invited and initiated). Mark condescendingly puts her down when she tries to participate in the discussion and it’s no surprise when she dumps him.

Humiliated, Mark goes back to his dorm where he rants on his blog about Emily’s chest size or lack thereof, and then 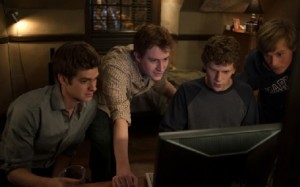 decides to create a “Face-mash” website that compares and ranks the hotness of various Harvard girls. The site receives 22,000 hits in 2 hours and crashes the Harvard servers. This draws the attention of not only the school admin board, but also the Winklevoss twins who want his help as a programmer to create an exclusive Harvard-only dating site. Mark agrees, only to blow them off and move on to his own idea of creating a social networking site, known as The Facebook.

With the help of his room-mates and best friend, Eduardo (the money-man), his website explodes, not just at Harvard but across states to other schools. Against Eduardo’s wishes (who by the way is courted by a Final Club), Mark engages Sean Parker, Napster founder, to leverage his vast amount of networking contacts. After dropping the “The,” from that point on, Facebook becomes an unstoppable phenomenon, and Mark is torn between his friendship and the business, between doing the right thing and hitting the million user mark. In the end, Mark is the world’s youngest billionaire, but is hated and sued by everyone around him…and sadly, even with 500 million friends, he is alone. The movie ends with him sending a Facebook friend request to Emily Albright, the woman who started it all.

What a well-written script! The dialogue in this film was amazing, and it delivered far more than I expected in terms of performance. Jesse Eisenberg was awesome as Mark Zuckerberg, and played the part of a bumbling but brilliant undergrad impeccably. I loved and hated him at the same time, envying his sheer brilliance while pitying his lack of social skills (and in some ways, a moral code). The movie, despite being drenched in a ton of legal back and forth, also 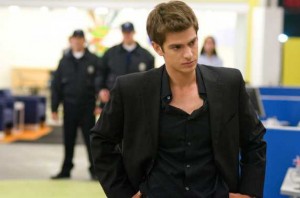 had a lot of emotion behind it, especially with the relationship between Mark and Eduardo (Andrew Garfield), his only friend who gets pushed out in the end. It openly and brutally portrays the capricious nature of relationships when money is involved.

Eduardo to Mark at the deposition: I was your best friend. I was your only friend.

And he really was. Eduardo stuck with him through thick and thin, even when Mark wanted more money for interns, and wanted to move to California. Without him, Facebook would not have been born because Mark didn’t have the money to launch or host the site in the first place. One could argue that someone of his talents would undoubtedly have found another way, but maybe it would have been  a year out or maybe he would have done the Winklevoss twins dating website or maybe he would have said ‘ok, move on to something else.’ My point is that without Eduardo’s funding, Facebook wouldn’t have started where it did. 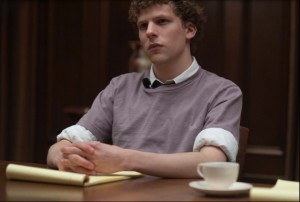 It’s funny to note that all of this (as narrated in the movie), happened because of relationship angst with a woman, and of course not getting into a Final Club when your best friend did. All about ego at the end of the day. And genius. And guts.  But mostly ego (and some angst).

Mark to the Winklevoss twins: If you guys were the inventors of Facebook, you’d have invented Facebook.

A brilliantly executed script with a stellar cast, I would rate The Social Network 4 out of 5 stars. It’s exciting and 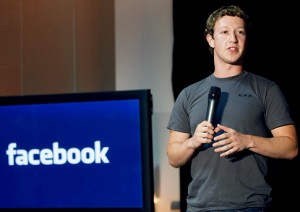 fast-paced, but also character-driven and real. You feel the highs when they’re high, and the lows when they’re (well, mostly Eduardo) hitting rock bottom. Funny and smart, it’s a film of our generation, and one to definitely see…well at the very least if you’re a Facebook user!

That said, will the Real Mark Zuckerberg please stand up? Yep, that’s him!