Let the wild rumpus start! Based on the initial reviews of Where The Wild Things Are, I decided to see this movie. I left the movie theater with mixed feelings. Spike Jonze did an excellent job of visually creating Max’s imaginary world and the wild things from Maurice Sendak‘s childhood classic. I’m not sure my five year old could watch this movie even though we’ve read the book many times together, but there were also moments where I felt that an older child would be bored rather than scared.

When I left the movie, I definitely felt a sense of “well that wasn’t what I expected.” Although I wasn’t entirely sure what I expected, so perhaps it was more of a sense of over-expectations left unfulfilled. However, the more I stew upon it, the more I feel that Spike Jonze did an admirable job communicating many of the emotional themes and metaphors from the book, as well as the visualization of the characters themselves, if only for the simple reason that I find myself thinking about this film for hours afterward.

The wild things were indeed scary, with their horns, pointed teeth and dark gums (oh yes, they were going to eat Max at 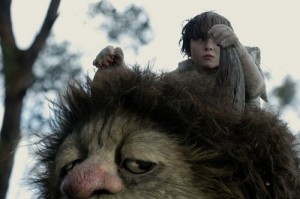 one point and frankly it was a bit terrifying). They were engaging, funny, and endearing…strangely all combining to make them very human. At times during the movie, I laughed out loud, like when one of the wild things gets belted by mud clods or when they all do the pile-on. I also did feel quite emotional toward the end when Max leaves the wooden heart with the “C” and sails away at the end. So I did connect on several levels emotionally with this film. Still, the cynic in me wonders why a child who misbehaves, bites his mother, and runs away, gets rewarded with cake in the end (yes, I know…a very cynical cynic). Don’t worry, I do get the “bigger picture” – child confronts his emotional and psychological fears and comes to understand the importance of home, his place in the world, and a mother’s love.

All in all, despite its snail-like pace which was painful at times, Where The Wild Things Are did draw out a considerable range of my emotions during its hour and thirty-four minute run time, which is more than can be said for some movies (also reviewed here). Exploring the gambit of fear, angst, rage, need, love, attention, friendship, foregiveness, and most of a 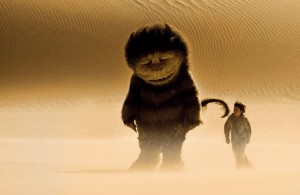 ll, unconditional love, this film’s appeal will undeniably be its ability to connect those emotions with experiences of your own childhood (even if your inside cynic says give the kid a good swat on the backside). You’ll either love it or you won’t. It’s one of those. If you’re on the fence, I’d say that by the time you get home, you’ll find yourself connecting with it more after the fact than you did during the movie, just as I did. And what I suspect you’ll also find is that, as with the book, everyone will have a different feeling or interpretation of the film. It’s the beauty of this particular story and how it uniquely connects with its audience.

For that reason, I give Where The Wild Things Are three and a half out of five stars. One word of advice, don’t go in with any expectations…find your inner child if you still can. You’ll either enjoy the wild rumpus or want to eat your feet off.