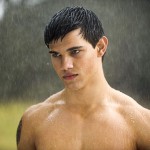 Hello hotness! Team Jacob away! I am actually excited to see this movie next month. In previous New Moon reviews, I’ve made my opinion about Edward, played by actor Robert Pattinson, pretty clear. I know I’m probably in the minority but he’s just not a good actor, even though yes, I agree that he’s cute especially with that “cool vampire hair“. Kristen Stewart also seems to be stronger acting-wise in some of the clips, and I think that will definitely be needed in this installment of the series. But Jacob, well I feel some real potential in that one. From what I’ve seen, Taylor Lautner’s acting is very credible and I have the urge to want to connect with him onscreen, which is always a good sign for me. I predict that fans may be making a move between “Teams” after New Moon drops on November 20th, 2009.