I’m not entirely sure I want to write this post because the memories are overwhelming. But I know that I must, if only to express my gratitude that my husband is here with me, and that we have been incredibly blessed to build a beautiful family and wonderful life in New York post 9/11. Living in New York, many people have their stories, and so much of those are about loss. It is devastating. I can hardly bear to watch the coverage on television this morning, remembering all the names of the people who died on that fateful day. It’s just heartbreaking. 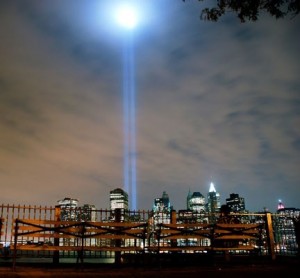 Today marks a day ten years ago when I was sure that my newly married husband of one year was one of the WTC victims. Standing at the base of the towers on the ground level just as the second plane hit, my husband was caught in a falling nightmare of metal, flame and human bodies. Slammed to the ground by the aftershock, he picked himself up and started running, helping those he could along the way. He did not wait, like so many others to see what was happening, he just started walking uptown, mercifully escaping the sudden subsequent collapse of the towers. My office at the time was at 40th and Park, where I was watching the news coverage in horror with my colleagues and friends … knowing that my husband’s subway stop at WTC would be right after the first plane crash. My heart literally stopped. Cell phones were out, and all I could see and hear were the sounds of utter chaos on the television. I’ve never prayed harder than I did at that moment, and all I could think in my head were the words willing him to come to me, repeating over and over, “please be safe, please just get here, just come to me.” And somehow impossibly, he did. Somehow he heard those words and he walked over 60 blocks, never looking back, not stopping even when things appeared to be safe. He didn’t stop until he got to my building. I will never forget the moment I saw him standing at my office door at 99 Park Avenue hours later, looking a little worse for wear in a torn and bloody suit, but thankfully, alive. It is a memory I will never forget.

Today also marks a day when I explained to my seven year old son what happened on 9/11 2001, and showed him pictures of the once majestic Twin Towers in downtown NYC. We talked a little about terrorism and hate, which was a little more difficult. I wanted to educate him but I didn’t want to scare him. I’m sure it will come up again in future conversation once he processes it. I also explained to him that his daddy managed to escape the WTC unlike many others who died that day. Watching the memorial briefly on television where a little girl was reading out the names, he asked me, “is that one of the little girls who doesn’t have a daddy?” I could only nod, yes.

So much loss, all because of hate. It is numbing. My thoughts go out to all those families who have lost loved ones, all of the heroes who fought valiantly to save lives and lost theirs in the process, and all the troops and everyday people who still fight to protect our freedoms every single day.

In remembrance, Nine Eleven, 2001. Those lost, we remember you, we honor you, we love you. Those who survived, like my husband, we are so incredibly blessed to have you with us and we love you.