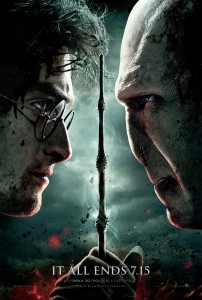 Wow. All I can say about Harry Potter & The Deathly Hallows is that this movie was EPIC. I’ll say it again … EPIC. What an amazing conclusion to a peerless book/movie franchise. I will admit that I did see HP7, part 2, twice in theaters, and yes, twice in 3D IMAX. Extravagant, I know, but so worth it.

So many of us grew up with the Harry Potter franchise, reading all the books (me, multiple times, in fact, I re-read each book prior to seeing any of the movies). I remember seeing Harry Potter and the Sorcerer’s Stone the other day on television, and thinking to myself, wow, Daniel Radcliffe is SO young and adorable. I can honestly say that watching the epic conclusion was an incredibly emotional journey.

As the part 2 installment of the final book, HP7 2 really picks up the pace and the action with the trio of friends working to locate the remaining horcruxes and defeat Voldemort before it is too late. Hogwarts is under the thumb of the Death Eaters with Snape as its headmaster, and Voldemort is on the cusp of complete world domination. Harry, Hermione and Ron make their way from Gringott’s and dragons all the way back to an epic finale at Hogwarts, in Harry’s words, to finish it the way they started it … “Together.”

You may recall my review of Harry Potter & the Deathly Hallows, Part 1, where I said that the movie was comprised of many little bangs, and not really one big bang. Well, that was certainly rectified in this film. It couldn’t have been more exciting or action-filled! I actually cannot wait until I get HP7, 2 on DVD so that I can watch them one after the other in immediate succession.

The effects in this film (appearance of the Death Eaters, the wand magic, the flying, to name a few) were incredible. I was on the edge of my seat half the time. The other half I was back in my seat bawling my eyes out. But I won’t give that away. You’ll have to see for yourself. Definitely an emotional roller-coaster ride.

I had a few minor peeves. **Spoiler Alert** For example, I thought the death scenes in the end were too quick for some of the important surrounding characters, like Fred or Lupin and Tonks. They needed more time. I also think I missed something with the Malfoy family scene. I knew why Mrs. Malfoy lied about Harry being dead but it wasn’t really explained in the movie. It irritated me a bit when she just walks away with Draco in the end (in the book, they’re in the hall with everyone else). Also, I know other people have commented on this but we really needed more of Snape’s memories. He was critical to this last book/movie, and a little bit more effort should have been made to show what drove him, whether that was in more flashbacks or him asking Harry to see his eyes at the end (Lily’s eyes) which didn’t happen!! I liked the fight scene with Harry and Voldemort but where was everyone?? In the book, they fight in the middle of everybody in the great hall. I didn’t like the sudden scene switch after the fight to Harry appearing in the hall. Too jarring. My last pet peeve was not getting to see Lupin and Tonks’ son at the end along with everyone else in the epilogue. But that’s really just a minor annoyance. 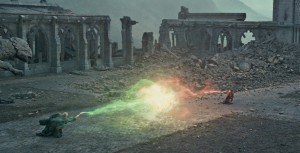 Peeves aside, overall, Harry Potter & The Deathly Hallows, part 2 was a great film and a very satisfying conclusion to the series for me. I loved the books, and I loved the movies. I’m sure I’ll be re-reading and re-watching all of them in the years to come. Potter fans will enjoy this film, hard-core fans will undoubtedly have issues with missing pieces from the books, and general movie lovers will likely love it.