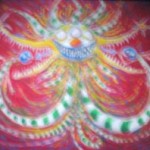 I went to the Museum of Modern Art today to see the Tim Burton exhibit, and it was pretty extraordinary. The exhibit showcases over 700 of his works over his lifetime, most of it private stuff, including cartoons, drawings, poems, films, puppets, paintings, costumes – you name it, it’s there. The exhibit runs the gambit showcasing the creative genius of a very unique, influential artist of our time.

It was completely sold out for Monday, so go early, but I managed to talk my way in luc

kily toward the end of the day (MoMA closes at 5:30pm). It was amazing! Apart from seeing a ton of his talented work including numerous drawings, sculptures of black paper heads with rows of sharp white teeth and googly eyes, and popular wax figures from the more well-known Nightmare Before Christmas and Edward Scissorhands, it was pretty awesome to see some of the unpublished, never-before-seen drawings he did as a child on pieces of notebook paper. And yes, he was just as insane even from then. It was neat to see some of the poems 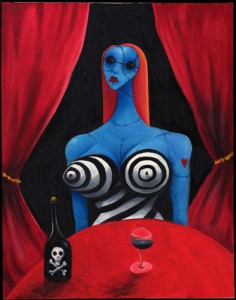 and captions he wrote to go along with his drawings, some quite hilarious. Gotta love “Stain Boy” and the boy with nails in his eyes with its accompanying poem – “too bad you can’t see the Christmas tree because you’ve got nails in your eyes” (I’m paraphrasing from memory here). Talented but oh so freaky.