I missed the airing of Blood Brothers on TV last Thursday so I watched it on the CW online, and it was pretty good, especially in full-screen mode. Check it out here. 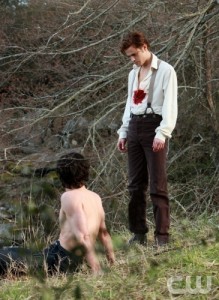 in the right direction! I really liked the flashback scenes, especially the ones in the beginning which tied in Katherine being locked up with Elena locking Stefan up. That scene of both of them through the bars was neat. I like how they brought the images together to connect the past and the present. Getting more of Stefan and Damon’s back-story is also making the plot deeper and more complex with all the different participants.

I love that Jeremy and Anna are back together. Brings back memories before Elena and Stefan became an old married couple. Kidding! It’s cool that she trusts Jeremy enough to give him the scoop of everything going on between Pearl, Damon, and her uncle John. It was a sweet moment when she tells him that he is her weakness. I want to see Jeremy take a more active role, maybe with putting a beat-down on uncle John.

LOVED Elena’s backbone in this episode. I wrote about her being a bit wishy-washy in past episodes. But holy crow! Even I was scared when Stefan got all up in her face, and she just stood her ground even though he went all fangy and veiny in the eyes. Good for her! It’s not just physical gumption, she’s a stronger character too.

Elena: Our actions are what set things in motion. But we have to live with that. […] You can keep fighting, it’s your choice.

I really like that she’s become Stefan’s rock, believing in him when he doesn’t even believe in himself, especially after learning what Damon has told her. And I totally take back what I said about them being an old married couple. That kiss at the lake was a nice very real moment.

Super interesting twist that Stefan was the one to force Damon to turn when all he wanted to do was die. Stefan’s a little 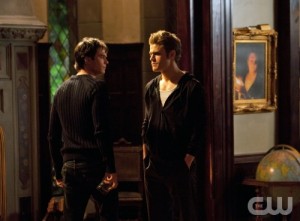 creepy when he’s full out human-blood-loving vampire even in the flashbacks. Anyway, no wonder the guilt is killing him now. So Damon’s got two reasons on why he hates Stefan – because he forced him to turn and because Katherine chose him too.

Damon: You got what you wanted, you and me for all eternity. But hear this brother, I will make it an eternity of misery for you.

Despite all that, Elena is right. Damon does care about his brother. Otherwise why would he care whether Stefan consumes human blood or not, despite his offhand comment about cleaning up after him.

I really don’t like John Gilbert’s character, and can’t believe that he killed Pearl and Harper. I am already hoping that he dies an excruciating death. But death-wishes aside, what is his end-game? And who is Forbes, the guy he called on the phone after he killed Pearl? It’s all getting twisty now especially that Isobel has finally shown up considering John knew her as well. What’s going to happen next? Exciting times!

I can’t wait for next week’s episode! The Vampire Diaries airs on the CW on Thursdays at 8pm EST.