The Vampire Diaries are back with a vengeance from where they left off last year! Woot! 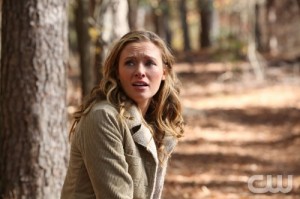 The episode opens with a bang with Jules waking up post-werewolf extravaganza near a camp full of dead bodies and miscellaneous body parts. She’s right in the middle of getting rid of all the evidence when a police car shows up, and she puts on a nice show that all her friends were killed by a wolf, right before she takes the poor cop out. Piece of work, that one.

Meanwhile, Rose’s wolf bite is getting worse and worse, to the point where she has delusions, and is craving blood like she’s a newbie vampire. She attacks Elena thinking that she’s Katherine, and goes on a Mystic Falls free-for-all blood buffet. Not to mention that her shoulder looks like a piece of rotting meat. I do have to say though that her acting was spectacular – I really enjoyed watching her 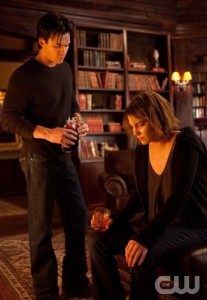 descent into madness and pain, only because she did it so incredibly well. It was pretty powerful and raw. Best acting so far I’ve seen on the CW, that’s for sure.

Second-best in the acting department on this episode is of course my boy, Damon, who really got his heart rocked in this one. Obviously, he had feelings for Rose, and when he couldn’t save her (especially knowing that she took the wolf bite for him), he started breaking apart. Love, love, love the scene at the end when he takes Rose into a dream sequence just before he stakes her – that was so romantic and tragic all at the same time.

The whole Tyler/Caroline thing needs to move at a quicker pace. It’s obvious that they have feelings for each other, given what they’ve both been through together. But I guess there has to be some kind of build-up before any vamp/wolf fraternization. That’s where Jules comes in…saying things to Tyler about Caroline killing Mason, and trying to drive the two of them apart. Hopefully Tyler will stand up for himself, but we all know that he’s a bit of a hothead already and liable to fly off the handle. Jules’ ominous “I got my pack coming” was a little cliche for me, but I suppose that a vampire/werewolf showdown is in the works, especially after Rose’s untimely demise. 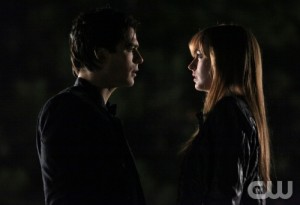 Speaking of, who knows what kind of rampage Damon’s going to go on now that he has completely lost his mind, and gone back to the dark side. Guess he’s thinking that not feeling anything at all is a hell of a lot better than feeling anything period. Poor Damon – he’s definitely out for blood…some blond werewolf blood to be more precise. I do have to admit though, that while it was good to see Damon’s sensitive side, it’s kind of cool that the bad-boy-with-bite is back. Can’t wait to see what Elena thinks about that one.

And I almost forgot – Uncle John…er…baby-daddy is back. It will be interesting to see what role he’s going to play in the whole mash-up. Good vampires + bad vampires + random werewolves + guys with immortality rings + witches and warlocks + the girl everyone seems to be in love with = ?????? TBD, folks. TBD.

The Vampire Diaries airs on Thursdays at 8pm on the CW.