The Vampire Diaries season premiere opened with a bang. I completely forgot that Katherine was back so it was good that they did a repeat of last season’s finale when she cut off John Gilbert’s fingers.

So to recap, Elena’s doppelganger, Katherine, is back and is in fine form getting to know all of the new Mystic Falls characters, and causing a ruckus (yes, I wrote ruckus, circa The Breakfast Club) with the old ones, namely Damon and Stefan. The whole crux of this episode is Katherine getting in between Stefan and Damon. True to form, she plays Damon like a fiddle and demolishes all of his hard-earned humanity in one brutal moment.

Katherine to Damon: The truth is I’ve never loved you. It was always Stefan.

Stefan predicted that she would try to break them apart, and told Damon t 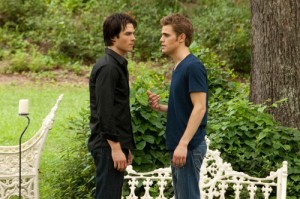 hat they needed to stick together. But she found the one thing that was like a thorn between them – Elena. I actually felt Damon breaking into pieces when Elena told him that it will always be Stefan, this coming right after Katherine said the same. Talk about a double blow, always second-best. No wonder the poor guy goes completely mental and tries to kill poor Jeremy, who incidentally doesn’t die because Uncle John has given him his father’s ring. Still, poor Damon. All he wants is somebody to love. (Me, me, pick me!)

Speaking of Elena and Katherine, looks like the main difference between Katherine and Elena (apart from the black

capillaries around the eye and the elongated fangs) is a little bit more bounce in the hair – maybe some volume shampoo or some hot rollers? Oh, and the sexy model walk which was in action after she kills Caroline in the hospital. Elena definitely doesn’t have that bit-o-skank in her. As a pet peeve, was anyone else screaming at the television for Elena to change her clothes or something so that they would know Elena versus Katherine? Wear a red scarf or something for Pete’s sake!

Nice new addition following the introduction of the werewolf plot-line after the death of Mayor Lockwood last season with his (super hot) brother, Mason Lockwood, who obviously has some things to teach his young nephew, Tyler. Full moon, anyone? Yes please!

Bonnie is back and looks to be stronger than ever, especially with her little mind control trick on Damon. Love that it didn’t work on Katherine. Still, she refused to be beaten even when Katherine had her up against a wall by the scruff of the neck.

Lastly, I didn’t realize just how much I’d missed Damon and his awesome smart-ass one-liners. LOVE that they are back. The Vampire Diaries just isn’t the same without them.

Elena to Damon: How are you doing?

Damon: Great Elena, walking on sunshine, thanks for asking.

Damon to Katherine: Don’t pout, it’s unattractive in a woman your age.

Classic. Don’t know what we’re going to do now that he’s gone all evil again. Will he still at least be evil-funny? I hope so!

Next week’s episode looks like it will be a fun one especially with a hungry baby vampire-Caroline on the loose, and of course, Katherine’s ominous “game on” at the end of the episode.

What in tarnation is the bouncy-haired, fang-toothed siren up to? I can’t wait to find out!

5 Comments on The Vampire Diaries – Season Premiere: The Return

1Pingbacks & Trackbacks on The Vampire Diaries – Season Premiere: The Return