Drumroll please…the True Blood finale has come and gone, leaving us to wait out the ten long months until next summer. Overall, it wasn’t a bad finale, lots of blood, action, and black vampire ash. And let’s not forget all the other intrigue peppered into this last episode – Bill’s hidden secrets and attempt to kill Eric, Sookie’s emotional breakdown and departure into the light, and Lafayette’s freaky clairvoyant visions.

Love the appearance of Godric who attempts to “save” whatever is left inside of Eric so that he can find peace, but Eric is too consumed with vengeance and hate to forgive Russell for killing his family.

In the end, he half-listens and saves Russell from the true death by sunlight even though Pam had a few choice words for him.

Pam: Do the world a favor and let that little [bleep] fry. *love her!*

But even though he saves him, Eric still wants Russell to be punished so he goes against what Godric says and buries Russell in liquid concrete wrapped in silver.

Godric: So much hatred.

Eric: This is who I am, Godric. This is what you made!

Sookie also goes off the deep end in this episode. She’s one foul-mouthed, bad-ass-fairy, flinging her light around like it’s no man’s business and cursing all vampires to hell. Honestly, I don’t blame her.

Sookie (to Bill, Eric, Pam, Russell): Go crawl back into your holes you creepy cold freaks!

Then she takes Russell on and gives it to him hard and straight, schooling him like a little boy to “watch his [bleeping] language.” I was laughing out loud especially when she was leading him on about what he was willing to give her in exchange for his freedom.

Russell: I’ll give you my word that I will not harm you or anyone you love.

Sookie: Stepping around the fact that your word is worth about as much as tits on a turtle.

Classic, doesn’t get any better than tits on a turtle in my book. Then after she does that, she goes medieval on him, spraying him in the face with liquid silver, and then emptying poor Talbot in the garbage disposal and pulverizing his remains. I was a little taken aback by her maniacal laughter as she tortured Russell. That was way too weird, and not what I expected from Sookie, but I guess she’s just about had enough of the vamps.

I was actually quite happy with the wrap-up of the pretty lame were-panther story-line, leaving Jason in charge. It was cool to see him taking on the responsibility of looking after them. They all looked so pathetic and scared, and he just manned up even though he really has nothing to do with them outside of Crystal.

Jason to Andy: Andy, this ain’t about us. There are bigger things. […] Like a whole lot of other people who ain’t really able to fend for themselves. […] Sometimes the right thing to do is the wrong thing. And I know I did the right thing.

Thought that was a nice moment for Jason because he’s scripted as the bone-headed, sex-loving, brainless, bungling boy-toy. I loved that he was standing up for something. I still think he should have put the beat-down on Crystal’s hillbilly boyfriend but maybe the’yre saving that for next season.

So glad to see that they brought Alcide back for the last episode. Definitely saw some more sparks between him and Sookie, not to mention the jealousy from Bill and the, um, eye standoff between the two of them. Don’t know about you, but I may just be leaning toward Alcide.

Lafayette’s also gone a bit mental in this episode with all his scary visions as his powers start to manifest – seeing the blood on Sam’s hands, and Rene with his arms around Arlene’s neck. And of course, we learn that Jesus is a witch, which was predictable. I was leaning toward sorcerer but man-witch is fine too.

Lafayette: You’re a witch who’s a nurse who’s a dude. Guess I lucked out then.

Speaking of happy couples, Hoyt stood up to his mother and Summer, telling them in no uncertain terms that he loved Jessica. And then he tells Jessica that he wants to live with her and marry her! Awww, love the happy endings (well, happy in True Blood terms anyway). But seriously, what’s with the freaky looking doll that’s on the floor of their new place? That one gave me the willies.

The final scenes were pretty cool with Bill doing the unexpected and knocking Eric into the cement mix next to Russell, under the pretext that he’s trying to protect Sookie since Eric has tasted her blood. I actually believed Bill when he was telling Sookie that he swore to protect her and that he’d always love her. But in another unexpected twist, Eric shows up at Sookie’s doorstep and reveals Bill’s worst secrets that he was tasked to find Sookie by Sophie-Anne and that he let the two people beat her to death just so that he could feed her his blood. Needless to say, Sookie goes ballistic.

Sookie to Bill: You manipulated me into falling in love with you! […] Love! You don’t even get to use that word. I rescind my invitation!

Sookie to Eric: You too. Get the [bleep]off my porch, and out of my life. […] Go back to hell where you came from, you [bleeping] dead piece of shit. 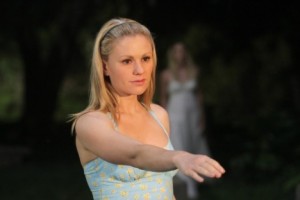 I do have to say that Eric looked incredibly hot covered in all of that cement, bringing back memories of last season when he was smoking-hot. But I digress.

So meanwhile, Bill goes back to his house where he challenges Sophie-Anne, Crouching Tiger, Hidden Dragon-style, and Sam shoots his brother who can’t read in the back, all for a measly bag of money. Tara shears her hair off, metaphorically shedding all the ugliness in her life, and takes off without looking back.

And finally, after basically telling Eric and Bill where to stuff it, Sookie goes to Gram’s grave where she meets Claudine and disappears into the proverbial sunset with her the rest of her shirtless white-clad little fairy buddies.

And that my friends, is that. End of True Blood Season 3. Now we begin the long hiatus to Season 4. Until then, thank goodness the Vampire Diaries are back on!

2 Comments on True Blood Finale Review: Evil is Going On